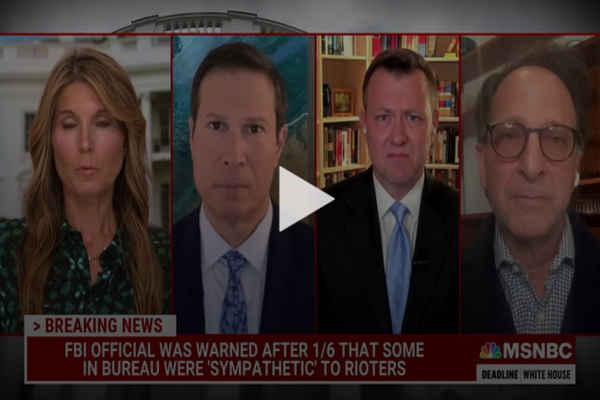 (breitbart) – Former FBI agent Peter Strzok said Monday on MSNBC’s “Deadline” that he believed the riot at the U.S. Capitol on January 6, 2021 was a far greater threat to American democracy than the 9/11 terror attack.

Anchor Nicolle Wallace said, “I worked in the administration in which he served as FBI director. What he sort of gave birth to in the lexicon was the FBI would never again, first of all fail to sync up with a CIA, and all sorts of artificial and real walls were torn down and they would never again fail to connect the dots. I’ve not heard one utterance of connecting the dots from Christopher Wray in the days after the deadliest attack on the U.S. Capitol in history.”

Strzok said, “I think that’s right. I think if you look at the scale in terms of a threat to democracy, 9/11 was a tragedy. We lost thousands of lives in a horrific way. We still mourn to this day. But when you look at something that is an attack on democracy, something that could actually bring about a fundamental change to American governments, 9/11 is nothing to January 6th.”

He added, “This is a far greater threat to our constitutional democracy than anything we’ve faced in the past 20 or more years. We need to be addressing it the same way. I suspect if they were, if we were, we might hear more about it, and I think that’s the sort of thing that gives a lot of observers, those of us who have been in the FBI, a little bit of concern whether the same urgency and approach to the situation, whether that’s on par with the nature of the threat we’re facing right now.”