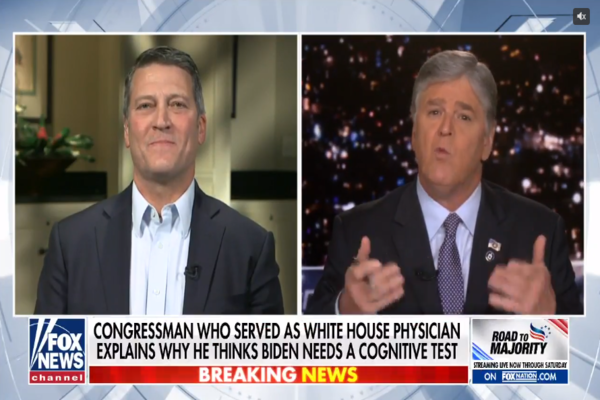 (FOXNEWS) – EXCLUSIVE: Texas Republican Rep. Ronny Jackson, the former White House physician for Donald Trump, called on Democrats to follow through with their prior demands regarding a president’s cognitive ability and have President Joe Biden assessed.

Following speculation on Trump’s mental aptitude one year into his presidency, he agreed to take the Montreal Cognitive Assessment (MoCA) – a 30 point exam that tests for memory impairment.

“The far left and the mainstream media were demanding that be the new standard for anybody who’s going to lead our country and be our Commander-in-Chief and our head of state,” Jackson said in an interview with Fox News on Saturday. “I’m just saying I agree with them at this point — we need to get it done.”

Jackson, who administered the test for Trump, explained that the exam is not an IQ test, but rather a standard test for age-related issues, including dementia and cognitive decline.

The White House said last month that Biden is scheduled to take his physical exam “later this year” – which if done before next year would be completed sooner than his predecessor’s health exams.

Both Trump and Barack Obama took their exams at the start of their second year in the Oval Office.

But Jackson pointed out that the White House has not said if the cognitive exam will be included during the president’s health screening.

The freshman Texas Republican argued that Trump set a new precedent regarding a president’s mental assessment – a sentiment at one point shared by Speaker of the House Nancy Pelosi.

In October 2020, Pelosi introduced a bill that would create a bipartisan commission of health advisors to evaluate the ability of a president to serve in the highest office in the U.S.

“This legislation applies to future presidents, but we are reminded of the necessity of action by the health of the current president,” she told reporters last year. “It’s not about any of us making a judgment about the president’s well-being.”

Republicans have voiced their shared concerns when it comes to Biden.

“I think he’s demonstrating every single day that there is something going on,” Jackson told Fox News. He added: “You don’t need to be a physician to look at this behavior and see there’s something concerning happening.”

Jackson pointed to an increase in instances where the president appears “confused.”

“You can go back – there’s forty years of tape of this man – he’s always made gaffes and stuff but these are different, he’s confused, he’s disoriented,” the Texas congressman continued.

“He’s just not aging gracefully at this point,” Jackson added.

“I’m just asking them, when you do the physical exam include the cognitive assessment,” he said. “As far as I’m concerned the standard precedent has been set and they need to follow and do the same.”

Fox News could not immediately reach the White House for comment.