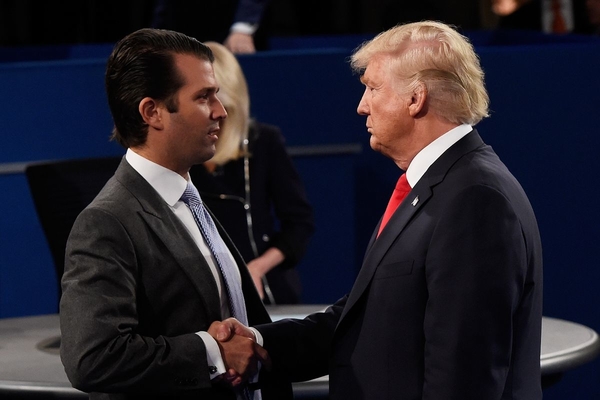 Donald Trump Jr. doubled down on his opposition to President Joe Biden’s nominee to lead the Bureau of Alcohol, Tobacco, Firearms, and Explosives (ATF) by urging Democrat senators from red and purple states to oppose David Chipman’s confirmation vote this week–and calling on the public to fight back as well by pressuring the senators to vote against him.

“David Chipman is an anti-2nd Amendment radical, who has a long record of supporting gun confiscation and restricting the rights of law abiding gun owners,” Trump Jr. told Breitbart News. “Conservatives and supporters of the 2nd Amendment must do everything in our power to stop his confirmation as head of the ATF. I’m proud to to use my megaphone to lead the charge against him and to stop Biden’s unconstitutional gun control agenda in its tracks.”

Former President Donald Trump’s eldest son has been a longtime Second Amendment advocate, and has been active in marshaling his and his father’s supporters for such causes. Trump Jr. weighing in with Breitbart News comes also as he pushed out a video on Twitter on Tuesday carrying that same message, and used a speech late last week at the Conservative Political Action Conference (CPAC) gathering in Dallas.

He then followed up the CPAC comments with the Tuesday tweet saying that Democrats are “panicking” over his speech and urged Americans to pressure Democrat senators to oppose Chipman.

Trump Jr. also sent out a follow-up tweet with the phone numbers of several Democrat senators’ offices, expanding his original criticisms from just Manchin and Tester to also include Sens. Kyrsten Sinema (D-AZ), Angus King (I-ME), and Maggie Hassan (D-NH). Hassan is up for reelection next year in New Hampshire. In the tweet, Trump Jr. said these senators cannot vote yes on Chipman and then claim they support the Second Amendment. “It can’t be both,” he said.

A source familiar with Trump Jr.’s plans told Breitbart News that because he cares deeply about the Second Amendment to expect him to continue to be very active on this front.

“Don’s focus is to use his megaphone to rally the troops against Chipman and to call out red state Democrats and ensure they can’t betray their constituents on 2A without paying a significant price for it,” the source close to Trump Jr. said.

Punchbowl News also had an item in a newsletter earlier this week, explaining that Trump Jr. views this–his first time engaging aggressively on a Biden nominee’s confirmation battle–as important to the cause of defending the Second Amendment. The piece observed that Trump Jr. plans to “[appear] on local and national television to push Democrats to oppose the nomination and he plans to add some paid elements to the effort.”

The report also noted that numerous “Democratic moderates” have yet to say which way they will vote on Chipman, thereby indicating that it is “going to be an interesting nomination to watch in the coming days and weeks.”

AWR Hawkins is an award-winning Second Amendment columnist for Breitbart News and the writer/curator of Down Range with AWRHawkins, a weekly newsletter focused on all things Second Amendment, also for Breitbart News. He is the political analyst for Armed American Radio. Follow him on Twitter: @AWRHawkins. Reach him directly at [email protected]. Sign up to get Down Range