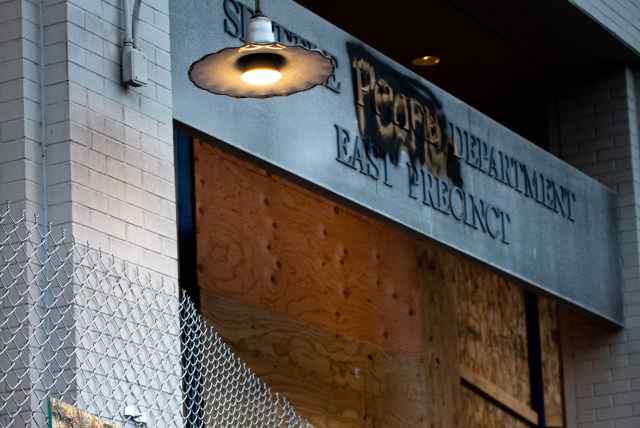 Democratic Gov. Inslee doesn’t even know his city is under siege

(Infowars) – President Trump issued a demand for Democratic controlled Seattle to be brought back under order immediately, as Antifa anarchists claimed control of a six-block zone and a police station.

“Radical Left Governor [of Washington, Jay Inslee] and the Mayor of Seattle are being taunted and played at a level that our great Country has never seen before,” Trump tweeted late on Wednesday.

“Take back your city NOW. If you don’t do it, I will. This is not a game. These ugly Anarchists must be stooped [sic] IMMEDIATELY. MOVE FAST!’” he continued.

Trump was responding to anarchists and BLM radicals establishing what they have termed a ‘Capitol Hill Autonomous Zone,’ complete with barricades, armed checkpoints, and a vow not to allow any police to enter the area.

Police were forced to abandon their station in Seattle’s East Precinct after threats to overrun and burn it down.

A sign outside the precinct which once said ‘police department’ now reads ‘Seattle People Department’.

Remarkably, Democratic Gov. Inslee said during a press conference on Wednesday he was unaware of the problem:

Armed anarchists are said to be manning checkpoints, demanding identification and frisking anyone wanting to enter the zone.

Police have claimed that they are also asking for people for cash and demanding ‘protection fees’ from businesses within the zone.

Meanwhile, some inside are claiming that it’s all sunshine and rainbows:

Reports have claimed that an ‘Antifa YouTube rapper’ named Raz Simone has declared himself a ‘warlord’ within the zone and is forming an army.

Video was posted purporting to show him attacking someone trying to get answers:

Simone himself says he isn’t a terrorist or a warlord:

Meanwhile, leftists refuse to accept there’s any problem, claiming Trump is lying in order to institute an armed take over: