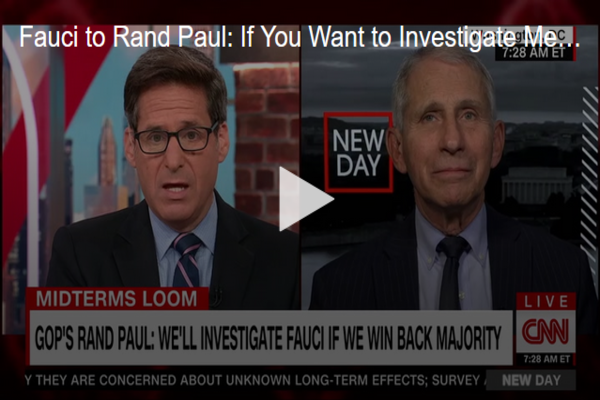 (breitbart) – National Institute of Allergy and Infectious Diseases director Dr. Anthony Fauci on Tuesday challenged Sen. Rand Paul (R-KY) to investigate him over his response to the coronavirus pandemic.

With the GOP threatening to look into Fauci and the Biden administration’s handling of the pandemic should they retake the majority, the White House chief medical adviser said to “go ahead.” Fauci advised that his records were an “open book.”

He asked Fauci, “Your reaction to Rand Paul and others saying they’re going to investigate you if they take office?”

“Well, there’s no reason to do that, but if they want to, go ahead,” Fauci replied. “My records are an open book. They are talking about things that are really bizarre, John, like crimes against democracy by shutting down the government.”

He continued, “All I have ever done, and go back and look at everything I’ve ever done, was to recommend commonsense, good, CDC-recommended public health policies that have saved millions of lives. If you want to investigate me for that, go ahead.”