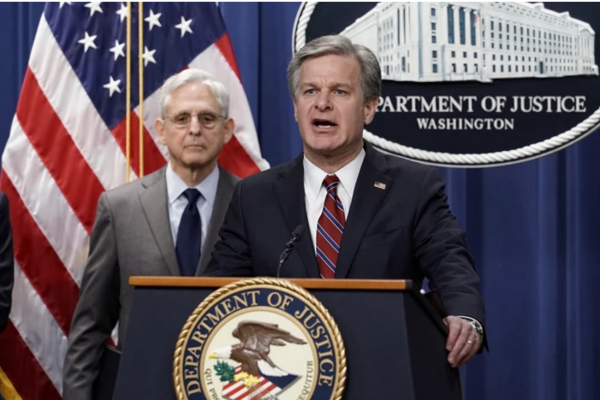 (WE) – FBI Director Christopher Wray warned about the “threat” posed by Chinese companies such as TikTok due to the sway that Beijing’s government has over them.

The Biden administration is conducting a security review of the popular video-sharing social media app, and Wray was asked Tuesday what was currently being done to investigate Chinese Communist Party involvement with TikTok. Although the FBI chief said he was limited in discussing “a specific ongoing investigation,” he nevertheless wanted to discuss two “very important threats” posed by Chinese tech companies.

“One, of course, something we’re all concerned about, which is the threat to our youth online,” Wray said. “But the second is the threat specifically from the Chinese government and the Chinese Communist Party, and the ways their laws are used as an aggressive weapon against companies — both U.S. companies and Chinese companies.”

The FBI director continued: “Under Chinese law, Chinese companies are required to essentially, and I’m going to shorthand here, basically do whatever the Chinese government wants them to in terms of sharing information or serving as a tool of the Chinese government. And so that’s plenty of reason by itself to be extremely concerned.”

TikTok is owned by ByteDance, a Beijing-based company that has links to the Chinese government . Shou Zi Chew, who simultaneously served as the CFO of ByteDance until November 2021, began serving as CEO for TikTok in April 2021, solidifying the influence of the Chinese parent company over the app.

ByteDance and TikTok have repeatedly claimed they have not and would not turn over TikTok user data to the Chinese government, but national security experts have raised concerns about China’s 2017 national intelligence law, which requires all Chinese companies to assist Chinese intelligence services when asked.

The Chinese government was furious about Wray’s comments.

“Spreading disinformation and then using it to hobble Chinese companies has become a go-to tool used by the U.S. government. China is firmly against this,” Chinese Foreign Ministry spokeswoman Mao Ning said Thursday. “The U.S. should act more responsibly, and take more credible steps to respect and observe the international rules that emphasize fairness, openness, and non-discrimination.”

It comes after ByteDance spent $1 million on lobbying from July to September, and TikTok itself reported spending another $110,000 in the third quarter of 2022. TikTok has put together a large lobbying team made up of one-time lawmakers and former congressional staffers from both parties to try to shield the company.

Sen. Marco Rubio (R-FL) and Rep. Mike Gallagher (R-WI) wrote last week that “TikTok is a major threat to U.S. national security. Yet Biden is encouraging greater engagement with the platform by directly courting TikTok influencers. Furthermore, reports suggest that he is nearing a deal that would authorize TikTok’s continued operation in the United States without any change in ownership.”

“Unless TikTok and its algorithm can be separated from Beijing, the app’s use in the United States will continue to jeopardize our country’s safety and pave the way for a Chinese-influenced tech landscape here,” Rubio and Gallagher said. “This is why we’re introducing legislation which would ban TikTok and other social media companies that are effectively controlled by the CCP from operating in the United States.”

Numerous U.S. government officials, including John Demers, the former assistant attorney general at the DOJ’s National Security Division, have asserted that TikTok poses a national security threat , and the Pentagon, other government agencies, and a host of organizations have banned employees from using the app.

TikTok’s privacy policy still makes it clear that it “may share all of the information we collect” with ByteDance. The company says that information may include “biometric information,” such as “faceprints and voiceprints.”