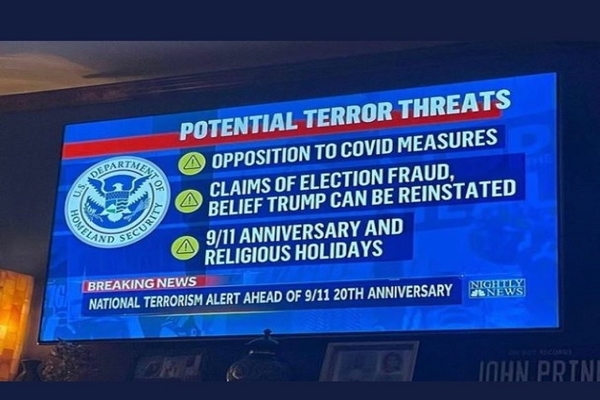 (IL) – The FBI’s “domestic terrorism caseload has exploded” in the wake of the feds wildly expanding the definition of “domestic terror threats” to include half the country, FBI director Chris Wray revealed Tuesday.

FBI Director Christopher Wray on Tuesday testified to a Senate committee that his agency’s domestic terrorism caseload had “exploded” since early 2020, in particular cases involving racially or ethnically motivated crimes.

“Since the spring of 2020, so for the past 16, 18 months or so, we have more than doubled our domestic terrorism caseload from about 1,000 to around 2,700 investigations, and we have surged personnel to match, more than doubling the amount of people working that threat than the year before,” Wray testified during a Senate Homeland Security and Governmental Affairs Committee hearing on threats to the homeland.

“We collect information about that threat. We have, as you say, prioritized that threat at a national threat priority level,” Wray said.

Violent crime is surging throughout the country but the FBI and DHS are focusing all their resources on manufacturing a phony “white supremacist” “domestic terror” threat.

The FBI was most recently exposed for having manufactured the Whitmer kidnapping plot and funding and leading the Satanic “neo-nazi terrorist” death cult Atomwaffen Division.

An undercover armed federal agent was just caught and inadvertently exposed at the Justice For J6 protest by fellow police.

The feds hyped the rally endlessly as a “domestic terror threat” yet nothing significant happened other than an armed fed getting caught posing as an active participant in the event.

During the same hearing, Wray cited the Whitmer kidnapping plot — which the FBI manufactured — as a reason to ban encryption and mandate backdoors.

FBI Director Christopher Wray said Sept. 21 that restrictions on encrypted chat services are needed to combat domestic terrorism—claims that have been disputed by a wide array of tech companies, industry associations and privacy groups, as well as other government agencies.

Wray made these remarks during the Senate Committee on Homeland Security’s counterterrorism hearing.

“I can’t overstate the impact of default encryption and the role it’s playing, including on terrorism,” Wray said in response to a question from Sen. Jacky Rosen (D-Nev.) about what tools Congress can give law enforcerment to counter domestic extremism.

“The information that will allow us to separate the wheat from the chaff, in terms of social media, is being able to—with lawful process—get access to those communications, where most of the meaningful discussions of the violence is occurring,” Wray said.

Wray’s remarks were the latest in what tech companies, industry groups, and civil rights organizations have criticized as an anti-encryption campaign by law enforcement.

[…] “Like Al-Shamrani, the plotters who sought to kidnap the Governor of Michigan late last year used end-to-end encrypted apps to hide their communications from law enforcement. Their plot was only disrupted by well-timed human source reporting and the resulting undercover operation,” Wray said at the time.

“Subjects of our investigation into the Jan. 6 Capitol siege used end-to-end encrypted communications as well.”

According to Wray and other law enforcers, tech companies should be able to build “backdoors” into their encryption that preserves privacy, while allowing for access when necessary. This, they say, strikes the proper balance between data security and national security.

The FBI is manufacturing fake “terror” threats to take away the rights of all Americans.

The Wall Street Journal on Tuesday ran a column from Holman W. Jenkins, Jr. calling for the FBI to be “abolished.”

Jenkins said the FBI’s “culture at the top seems incapable of using the powers entrusted to it with discretion and good judgment” and said the agency “should be scrapped” altogether.