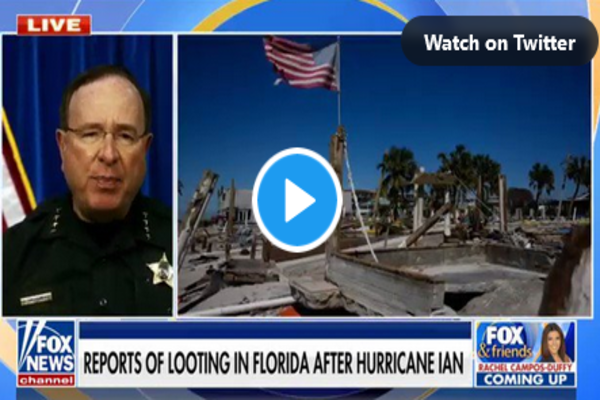 (breitbart) – Polk County, Florida, Sheriff Grady Judd is telling residents of his county to protect their homes by shooting looters until they look “like grated cheese.”

Grady told FOX News on Friday, “People have a right to be safe in their homes. They have a right for their property to be safe, even when part of their home may be torn away, and these looters, that’s unacceptable.”

Grady went on to encourage Polk county residents to defend their property from looters and to make sure looters understand there could be a high price to pay for taking advantage of hurricane victims.

On June 1, 2020, Breitbart News noted that Sheriff Judd addressed another incident with possible looters by encouraging homeowners to blow them “back out of the house.”

FOX 13 quoted Judd saying: “If you value your life, they probably shouldn’t do that in Polk County. Because the people of Polk County like guns, they have guns, I encourage them to own guns, and they’re going to be in their homes tonight with their guns loaded, and if you try to break into their homes to steal, to set fires, I’m highly recommending they blow you back out of the house with their guns. So, leave the community alone.”