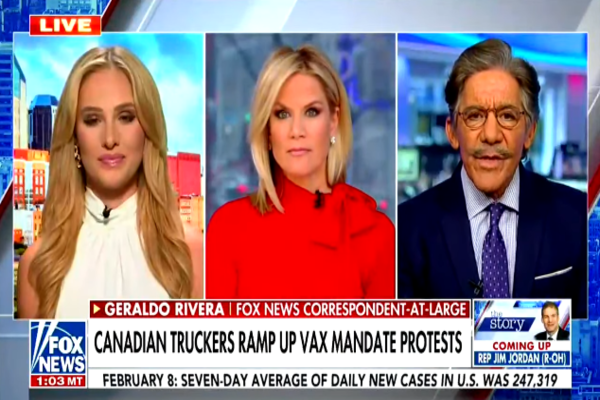 (breitbart) – Fox News host Geraldo Rivera said Wednesday on FNC’s “The Story” that the “Freedom Convoy” truckers in Canada are thugs terrorizing the residents of Ottawa.

Rivera said, “One man’s freedom is another man’s oppression. Their behavior has been nothing short of thuggish in Ottawa. They kept people in the neighborhood awake all night, revving their engines, blowing their horns. They’ve deprived Ottawa of business, of tens of millions of dollars, now they’re blockading the international bridges.”

He continued, “They’re laying off people, cutting their shifts short in automotive assembly plants because they can’t get the parts from Canada to the United States. They used their crowbars to threaten cops who were going to tow their trucks away they were blocking. They told tow truck drivers that they’ll remember them when this is over, a clear intimidation tactic. To give these guys the mantle of freedom fighters is absolutely appallingly naïve.”

Rivera added, “I understand the frustration about masks and all the rest of it, but to give these folks a pass is, I think, very destructive.”

He concluded, “When you have protesters bringing Confederate flags and Swastikas and to paint them in the same portrait as our Founding Fathers? What the hell is that about? They have been very destructive. Forty percent of Canada’s trade goes over the Ambassador Bridge that they have blocked. What about the hard-working people that have gone to work every day during this pandemic and now can’t get to work? Or can’t work because there’s no parts in their factory to work with? I think that it’s selfish, and it is excessive.”