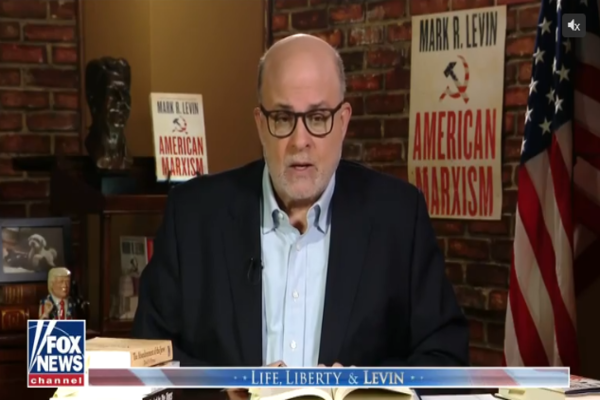 (breitbart) – Sunday, conservative radio talker Mark Levin opened his program with a scathing rebuke of the media, including Washington Post columnist and MSNBC host Jonathan Capehart, for claiming the results of Virginia’s elections earlier this month were a product of racial bias.

It is my contention that many of the major media platforms in this country are racist, and anti-Semitic, and that’s part of the problem we have in this country. They bring in contributors and guests, if not have hosts and so forth, who spread this poison and they do it constantly and they do it under the cover of news analysis. And of course, it’s none of those things.

So let’s begin here. You’ve heard me talk about the New York Times before. Well, I want to give you a little bit of additional information. The New York Times is supposed to be the gold standard for the media. There have been at least three tremendous books written on the subject of the New York Times and the Holocaust, and its abject failure to cover it.

One expert, David S. Wyman, The Abandonment of the Jews: America and the Holocaust (1941-1945). Another book, Beyond Belief: The American Press in the Coming of the Holocaust (1933-1945), Professor Deborah E. Lipstadt.

The third book, Buried by the Times: The Holocaust and America’s Most Important Newspaper, Professor Laurel Leff.

Now, why am I getting into this information with you? Because ladies and gentlemen, the press, for the most part, are corrupt. They are utterly corrupt. I want to get into a little bit of this with you.

Emory University Professor Deborah Lipstadt in her book, Beyond Belief. She saw the media’s self-censorship during the Holocaust as a broadly institutional problem. She wrote that, “The Press bears a great measure of responsibility for the public skepticism and ignorance of the scope of the war-time tragedy, the Nazi mass murder of Jews. The public’s doubts were strengthened and possibly even created by the manner in which the media told the story.”

This relates to what goes on in our country today, how the media distort, and lie, and spin.

“If the press did not help plant the seeds of doubt in readers’ minds, it did little to eradicate them during the war (World War II) — during the war, journalists frequently said that the news of deportations and executions did not come from eyewitnesses who could personally confirm what had happened, and they, as journalists were obliged to treat it skeptically. This explanation is faulty because much of the information came from German statements, (Germans weren’t hiding what they were doing), broadcasts and newspapers. If anything, these sources would have been inclined to deny, not verify the news.

“Neutral sources also affirmed the reliability of reports.” I mean, there were reports in New York for crying out loud.

“Moreover, even when the press did encounter witnesses, it often dismissed what they had to say, because they were not considered reliable or impartial.”

Taking direct aim at the New York Times, Professor Laurel Leff of Northeastern University, formerly a journalist, meticulously scrutinized not only the role of the media generally during the Holocaust, but the New York Times in particular, and she has written extensively about, quote “how the New York Times failed in its coverage of the fate of European Jews from 1939 to 1942.”

The left then makes the damning disclosure, quote, “The Times’ judgment that the murder of millions of Jews was a relatively unimportant story, reverberated among other journalists trying to assess the news among Jewish groups trying to arouse public opinion and among government leaders trying to decide on American response.”

The Times’ publisher, Arthur Hayes Salzburger, intentionally and repeatedly buried news about the Holocaust, deep within his paper, or ignored it all together. She writes, “Although the war was the dominant news, it need not have been and was not the only front-page news. The New York Times printed between 12 and 15 front-page stories every day; fewer than half of these typically concerned the war. The Times’ first story on the Nazi extermination campaign, which describe it as the greatest mass slaughter in the history appeared on Page five tacked on to the bottom of a column of stories, yet the deaths of other civilians, often fewer than 100, regularly appeared on the front page.”

“Indeed, Leff’s research, like that of Wyman and Lipstadt, found that the Times and the media overall withheld or buried much of what they knew about the Holocaust from the American public,” she wrote. “The way the press in general, and the Times in particular, presented the facts played an important role in creating the gap between information and action.”

“The way the Times and the rest of the mass media told the story of the Holocaust engendered no chance of arousing public opinion. The Times never treated the news of the Holocaust as important, or at least as important as say, informing motorists to visit the Office of Price Administration if they didn’t have their automobile registration number and state written on their gasoline ration coupons.”

“A story about that possible bureaucratic snafu appears on the front page on March 2, 1944. The same day that the last voice from the abyss was relegated to page four.”

And it goes on and on, and it wasn’t just the Holocaust; that would be bad enough. It was also Stalin.

And so he starved them to death, millions of them, and Walter Duranty reported in the front page and other pages, a newsman from the New York Times, that it was a bad harvest, that they were just going through problems.

He was on Stalin’s payroll. Stalin got him a girlfriend, whom he impregnated. Stalin made sure he had the best food, he had cars to travel, and there were British journalists who actually went into the Ukraine and saw the horror of cannibalism and so forth, and they were disgusted and furious with Walter Duranty, who got a Pulitzer Prize for his reporting, by the way.

And when you look at that, and then when you look at the New York Times about a half-century ago, 50 years ago, give or take, their reporter in Cuba building up Castro, talking about how Castro had thousands and thousands of freedom fighters, people who wanted democracy supporting him when he had about 12, maybe 20 at the most, because he was being defeated – – helped build up Castro and then Castro overthrows the government there. And of course, he was a communist, an enemy of the United States.

He was a surrogate of the Soviet Union, and even Castro thanked the New York Times for the help that it received, and bring it to modern day. The New York Times and Russia collusion. It was the point of the spear, pushing a story that we now know was a lie from beginning to end planted by the Hillary Clinton campaign and the D.N.C., planted by Perkins Coie, a Democrat law firm, one of whose lawyers has since been indicted.

Another lawyer, Mark Elias, who has dark money, millions of millions to influence the 2020 campaign and future campaigns, and, of course, the Obama administration, with the F.B.I. and Intelligence Agencies, and the lies that they used to try and destroy the Trump candidacy, and then the Trump presidency.

Anti-Semitic, and it’s not the only organization that was and I said that major news platforms in this country are also racist.

You know, the Marxist left likes to throw that word around, “racist,” to anybody who supports the Constitution, who loves this country, who believes in the flag and the National Anthem, the United States military and police officers. These Marxist reprobates throughout the media, throughout the Democratic Party, and of course, radicals who are part of the BLM and Antifa movements like to call everybody else racist, and that there is systemic racism in this country and so forth and so on. There’s not a damn thing you can do about it other than overthrow the country.

Jonathan Capehart at MSNBC, which is owned by Comcast, by the way, talking about the newly elected soon-to-be Lieutenant Governor of Virginia. She is a black woman born in Jamaica. She is a naturalized American citizen who served in the Marine Corps — as did her husband — a small businesswoman, and she was elected the first woman, the first black Lieutenant Governor of Virginia. Go.

JONATHAN CAPEHART, MSNBC HOST: Whiteness is a hell of a drug, fear worked, and Youngkin won in a state President Biden won just last year by 10 points. So, what did all these racist Virginia voters do Tuesday night in addition to elect —

LEVIN: All right, let’s stop. “All these racists for Virginia voters,” what kind of a bigot is this? He appears regularly on MSNBC and elsewhere.

Why would a major corporation, Comcast, which owns NBC and MSNBC put a bigot like this — that’s my opinion — on television, to spread hate? “The racist voters of Virginia”?

CAPEHART: … Youngkin as Governor. They elected Winsome Sears as Lieutenant Governor. She will be the first African-American woman to be elected statewide in Virginia history, writes the Wall Street Journal.

Nice try, but invoking the name of Lt. Gov.-elect Winsome Sears doesn’t prove my assertion wrong about the role of race in the Virginia governor’s election, not in the least.

Look, voting for someone black does not grant absolution from racism or being motivated by the racist —
(PAUSE VIDEO CLIP)

She believes in Martin Luther King and the content of one’s character, not the color of their skin. That’s why people voted for Winsome Sears. It has nothing to do with seeking absolution. Go ahead.

CAPEHART: … bullhorns that politicians used to play on racial fears for political gain.

LEVIN: Bullhorns? Bullhorns? That’s the Democratic Party in the Deep South, not the Republican Party in modern day Virginia. Bullhorns!

CAPEHART: … be clear. Having some of your best friends be black or family members be black or dating or being married to someone black or liking black music and culture is no pass either. Also, when you —

You’re as if you’re one. That’s what marriage is about.

This is the sickening mindset of these bigots, these American Marxists as far as I’m concerned, go.

LEVIN: “Black cards.” “Blackness isn’t transferable.” What in the hell is this buffoon talking about?

Now, we’re never going to have a united society. We’re never going to have a society where people look beyond race or faith or anything else for that matter as long as we have people with bullhorns and dog whistles like Jonathan Capehart, and he is certainly not alone, who are given these massive platforms — although not so massive on MSNBC, but you get my point — to spew their hate, and in my view, their bigotry.

But as you could hear, Jonathan Capehart doesn’t view you as individual human beings, he dehumanizes you and he pushes his pablum as he does, which is very, very dangerous and evil.

New York Times, MSNBC, and so many more, so many more of these platforms are racist and anti-Semitic.