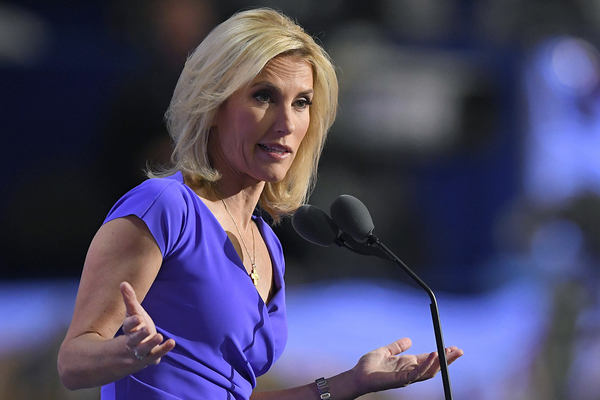 (foxnews) – Democrats are headed toward a “Thelma and Louise”-like ending, Laura Ingraham said in Friday’s opening monologue of “The Ingraham Angle.”

“The old party of FDR and JFK is now more like the party of Thelma and Louise,” the host said, referencing the 1991 buddy crime movie. Like its titular characters, “the Democrats are headed full speed ahead to the cliff’s edge,” she said.

Ingraham reported the Republican Party boasts a double-digit lead over Democrats on the generic midterm ballot for the first time ever in the CNBC All-America Economic survey.

With President Biden’s approval rating at 41% and his economic approval rating down 19%, Ingraham noted that suburban residents “like safe streets, a strong economy and strong border.”

She cited a poll that found “the most important issues for voters are inflation [and] immigration. Dems have bombed on each one,” she added.

The Fox News host continued, saying that Vice President Harris puts the left “between a rock and a hard place,” calling her “an unqualified, unintelligent and unlikable woman as [the] presumptive front-runner” if Biden does not run for reelection.

Secretary of Transportation Pete Buttigieg puts Democrats “in even deeper trouble,” with a predicted 11-percentage-point loss to former President Trump if he ran in 2024.

“This is what happens when you put diversity over merit,” Ingraham said. “Talent and experience always win out.”

“The lesson for Republicans is obvious: Trump’s policies worked. There’s no going back to the old perpetual war, open borders, globalist views of yesteryear,” she continued.