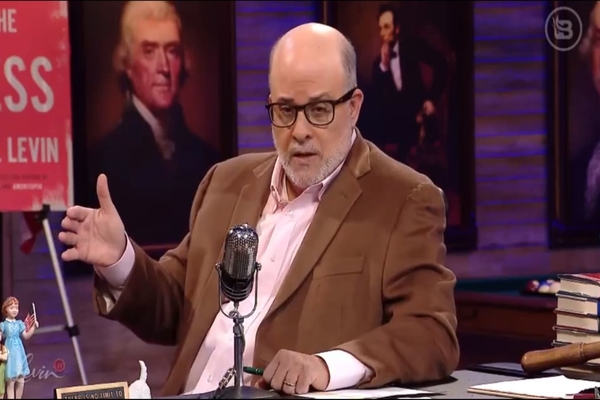 Recently, Trump sued several social media giants for censoring him and other uses, arguing that Big Tech had to abide by the First Amendment since it took direction from the government about public issues such as the coronavirus pandemic.

Levin noted that Psaki’s arguments had given new weight to Trump’s arguments, which are considered relatively novel.

Psaki appeared in the White House briefing room Thursday with Surgeon General Vivek Murthy, who had just issued a government health advisory, warning of the public health consequences about “misinformation” on coronavirus vaccines.

Later in an exchange with a reporter, Psaki outlined the extensive measures taken by the Biden administration to police the content of information on social media platforms regarding the vaccines (via White House official transcript):

Q  Thanks, Jen. Can you talk a little bit more about this request for tech companies to be more aggressive in policing misinformation? Has the administration been in touch with any of these companies and are there any actions that the federal government can take to ensure their cooperation, because we’ve seen, from the start, there’s not a lot of action on some of these platforms.

MS. PSAKI: Sure. Well, first, we are in regular touch with these social media platforms, and those engagements typically happen through members of our senior staff, but also members of our COVID-19 team, given, as Dr. Murthy conveyed, this is a big issue of misinformation, specifically on the pandemic.

In terms of actions, Alex, that we have taken — or we’re working to take, I should say — from the federal government: We’ve increased disinformation research and tracking within the Surgeon General’s office. We’re flagging problematic posts for Facebook that spread disinformation. We’re working with doctors and medical professionals to connect — to connect medical experts with popular — with popular — who are popular with their audiences with — with accurate information and boost trusted content. So we’re helping get trusted content out there.

We also created the COVID-19 — the COVID Community Corps to get factual information into the hands of local messengers, and we’re also investing, as you all have seen in the President’s, the Vice President’s, and Dr. Fauci’s time in meeting with influencers who also have large reaches to a lot of these target audiences who can spread and share accurate information.

You saw an example of that yesterday. I believe that video will be out Fri- — tomorrow. I think that was your question, Steve, yesterday; I did a full follow-up there.

There are also proposed changes that we have made to social media platforms, including Facebook, and those specifically are four key steps.

That will help us ensure we’re getting accurate information to people. This should be provided not just to researchers, but to the public so that the public knows and understands what is accurate and inaccurate.

Second, that we have recommended — proposed that they create a robust enforcement strategy that bridges their properties and provides transparency about the rules. So, about — I think this was a question asked before — there’s about 12 people who are producing 65 percent of anti-vaccine misinformation on social media platforms. All of them remain active on Facebook, despite some even being banned on other platforms, including Facebook — ones that Facebook owns.

Third, it’s important to take faster action against harmful posts. As you all know, information travels quite quickly on social media platforms; sometimes it’s not accurate. And Facebook needs to move more quickly to remove harmful, violative posts — posts that will be within their policies for removal often remain up for days. That’s too long. The information spreads too quickly.

So, these are certainly the proposals. We engage with them regularly and they certainly understand what our asks are.

Levin pointed out that Psaki had essentially made Trump’s case. “Jen Psaki is the best witness for the Trump lawsuit.”

Levin, the author of the new bestseller, American Marxism, noted that Psaki and Dr. Murthy were delegating immense power to control speech to the very platforms that had suppressed information about the plausible theory that COVID-19 had escaped from a lab, and had censored information about Hunter Biden’s laptop, falsely calling it disinformation.

He warned that Trump’s legal fortune would depend on which judges ultimately heard the case, but said that he had been convinced by Psaki’s own words and behavior, as well as those of Dr. Murthy, that Trump’s argument was convincing.