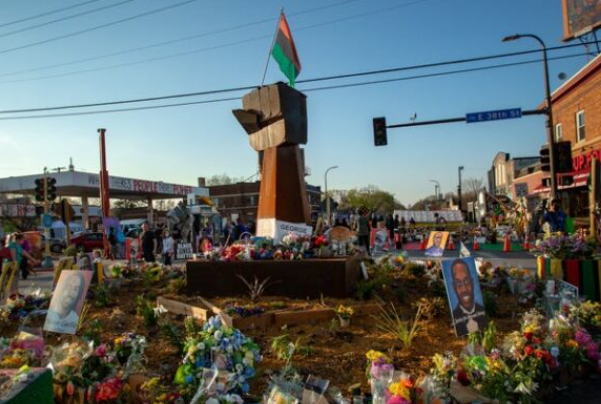 (bigleaguepolitics) – A drive-by shooting occurred at “George Floyd Square” in Minneapolis during Tuesday’s commemoration of his death exactly one year ago.

Multiple shots rang out at East 38th and Chicago Avenue, the site of the citizen-occupied “autonomous zone” and memorial to Floyd. The shots appeared to come from a dark-colored SUV. Allegedly two people were struck and taken to the hospital.

Bystanders heard anywhere from a dozen to two dozen shots. The condition of the alleged victims is currently unknown.

In somewhat related news, a Black Lives Matter activist in London took a bullet to the head in a drive-by shooting early Sunday morning. But police believe that Sasha Johnson, who remains in critical condition, was not a specific target.

Big League Politics also recently reported on the special instructions that white venerators of St. Floyd have to follow at “George Floyd Square”:

Attendees of the memorial are urged to “enter with reverence, humility, and openness, as an invited guest,” “care for each other by wearing a mask and asking others to wear a mask,” and “honor the space as a place to connect and grieve as caring humans.”

This is when the flier became explicitly racist against white people, offering them instructions on how to police themselves to satisfy their BIPOC superiors.

“Decenter yourself and come to listen, learn, mourn and witness. Remember you are here to support not to be supported,” the first demand of white people reads.

“Be mindful of whether your volume, pace, and movements are supporting or undermining your efforts to decenter yourself,” the instructions continue.

“Seek to contribute to the energy of the space, rather than to drain it. Bring your own processing to other white folks so that you will not harm BIPOC,” the flier continues, descending into half-literate buzzwords obviously written by a low IQ individual.