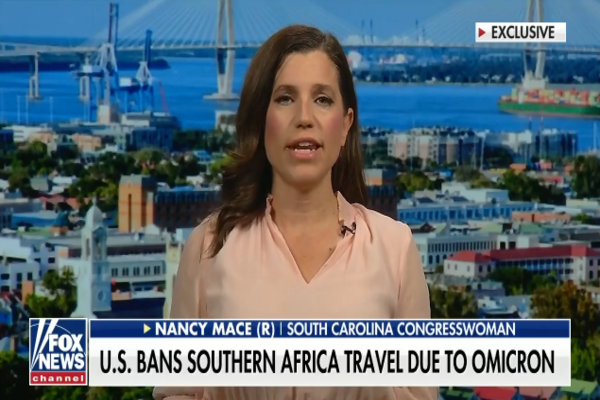 (breitbart) – Representative Nancy Mace (R-SC), a critic of the so-called Build Back Better plan, predicted House Republicans would win “two dozen seats or more” in the upcoming midterms during an appearance on FNC’s “Sunday Morning Futures” this week.

Mace told guest host Jason Chaffetz that the impact of Democratic Party policies would lead to Republicans assuming control of the House of Representatives in 2023.

“At the end of the day, it’s solely going to be up to Senator Joe Manchin and Senator Kyrsten Sinema,” she said. “I think, the more you dig into Build Back Better, the worse it is, in terms of kinds of spending. And we’re not just seeing Build Back Better here in the United States. This is a global effort. There’s something called Build Back Better going on around the world. And this is about social spending, providing social safety nets, and paying people. One of the reasons that inflation is going to get significantly worse is because of the greater spending we have through Build Back Better.”

“And through other COVID-19 relief program spending we have done in the past,” Mace continued. “Taxes are going to go up. That will also affect inflation. And I believe, until Republicans are in the majority in 2022 — and I believe that will happen. It’ll be significant. We will win at least two dozen seats or more. It’ll be incumbent upon us to try to reverse some of the policies that will be created in this. And that’s going to be very difficult to do if it goes through. But thank God for Senator Manchin and Senator Sinema at this point.”

“They may be the only — the last line of defense on this thing,” she added. “And we have got to give them the support and continue to show why this — why this spending is so bad. And it’s one of the reasons the supply chain and things are running out of the grocery store, because of all this spending and paying people not to work. You see for-hire signs in every single business. And the cost of hot links to hot dogs and gas, everything’s going up.”