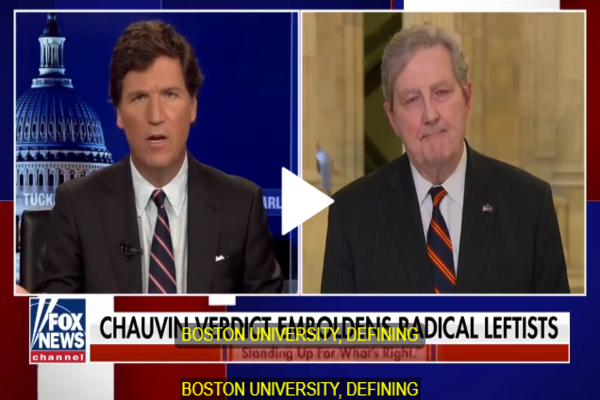 The Louisiana Republican said he took exception to President Joe Biden, who he said knew better but has aligned himself of being to the left of Vladimir Lenin.

“I’m listening to the congresswoman, and I’m thinking no disrespect, but how does anyone get to be her age and believe that drivel?” Kennedy said.  “This, to me, is what this is all about, Tucker: No fair-minded person believes that cops, many of whom are racial minorities, get up every day and go to work hoping for the opportunity to be able to hurt someone, including but not limited to people of color. That’s nonsense.”

“But the woke-aristas like the congresswoman, they really believe it,” he continued. “They really do hate cops just because they’re cops. They really do want to defund the police, which will result in a fantastic impression of hell. The woke-aristas really do believe that when a cop shoots a criminal, it is always, every single time, the cop’s fault. But when a criminal shoots a cop, it’s always, every single time, the gun’s fault. These folks really do have contempt for America. They should have gratitude, but they have contempt.”

“They’re not happy and won’t be happy until they take a sledgehammer to America’s core,” Kennedy explained. “Now, you’re saying to yourself probably, this is America, you’re entitled to believe what you want, and I agree with that. And I have hope for them — Jellyfish have survived 650 million years without a brain, so there is hope for them. But what I’m disappointed in is President Biden.”

“He has encouraged this,” he added. “I listened to him last night, and he knows better. No one can get to be his age with his experience and not know this is nonsense. I hear people say all the time, you know, cut him some slack. Maybe he’s lost his fastball. No, he knows better. He’s encouraged it. And it’s hurting America, and it’s hurting people, and I knew that President Biden would be left of center. I never dreamed he’d be left of Lenin. And he needs to stand up.”