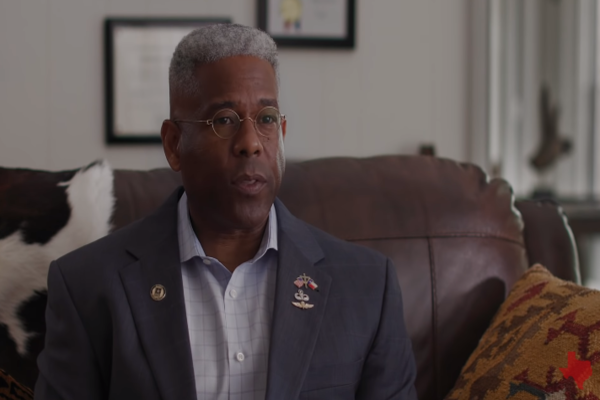 (foxnews) – Saying that he can no longer “sit on the sidelines,” Allen West on Sunday announced a run for Texas governor, launching a primary challenge against Republican Gov. Greg Abbott.

The outgoing Texas GOP chair – a controversial and outspoken former congressman from Florida – made his announcement in a campaign video he played during a July Fourth appearance at the Sojourn Church in Carrollton, Texas.

“There comes a time when a warrior understands that maybe he has to go back and pull out that sword,” West, who served in the Gulf War and the Iraq War before retiring from the U.S. Army as a lieutenant colonel, said in the video. “I am now drawing my sword.”

“I have not been in elective political office for about a decade. But I can no longer sit on the sidelines and see what has happened in these United States of America, what is happening in the place that I call home,” West declared.

And he emphasized that he’s running to be “governor of the Lone Star State so that we can protect and defend our home.”

“I couldn’t think of a better place and a better day to make that announcement,” West told fellow parishioners after the conclusion of his video. “Let’s stand up for God, for country, and for Texas.”

The political move comes as no surprise. West hinted a month ago, when announcing that he would be stepping down as state party chair, that he was mulling a run for statewide office.

West, who as Texas GOP chair made the extremely unusual move of vocally criticizing Abbott over the governor’s efforts to battle the coronavirus pandemic, becomes the second Republican politician to primary challenge Abbott from the right, following former state Sen. Don Huffines.

The governor has been continuously in the headlines the past month. He signed into law bills restricting the teaching of critical race theory in his state and allowing Texas to carry weapons without a license. And under orders from the governor – the legislature will return for a special session this month to pass legislation tightening voting access rules, another GOP priority.

The governor has also beefed up security along his state’s border with Mexico – and pledged to finish construction of the border wall begun under former President Trump’s administration, amid the surge this year in migrants crossing the border. Last week he grabbed national headlines as joined Trump for an event at a unfinished portion of the border wall in Texas. Earlier this year Trump endorsed Abbott’s 2022 reelection bid.

Some Republicans in Texas say that Abbott’s muscular moves are an effort to protect his right flank, after taking plenty of incoming fire last year from furious Texas conservatives over his mask mandates and COVID-19 restrictions on businesses. And the governor was also dinged earlier this year for the state’s handling of a deadly winter storm, which triggered a electrical grid collapse that left millions of Texans freezing amid abnormally frigid temperatures.

Longtime Abbott political adviser David Carney said that campaign politics was not a motivating factor behind the flurry of activity.

“We have zero focus on all the chatter,” Carney told Fox News last week. “We are 100% confident we know where the Republican primary voters are. We’re not worried at all about the primary. It’s the silly season in Texas because the legislative session’s over and lots of people have lots of dreams.”