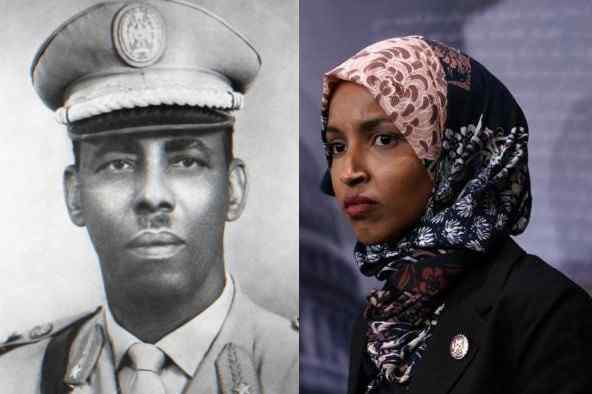 (Big League Politics) – As Minnesota Congresswoman Ilhan Omar accuses American civilization of being a “system of oppression,” it appears that the progressive Democrat has provided little to no public information on her own grandfather’s activities and public duties as a government official in one of Africa’s worst dictatorships.

Omar has described her grandfather, Abukar Omar, as the Director of the National Marine Transport in Somalia in the 1980’s and possibly earlier, serving in the government of then-President Siad Barre. Barre, who took power in 1969, originally governed the country as a Marxist-Leninist before switching his Cold War allegiances to the United States in the late 70’s.

Barre’s government is known as a prolific human rights abuser, persecuting the nation’s Isaaq tribe in a series of government sponsored killings that scholars have referred to as a “forgotten genocide.” Estimates of the civilian casualties of the Isaaq genocide range from 50,000 to 200,000 people.

Omar, who was a child at the time, has also described her family leaving Somalia in 1991, the very year that President Barre was overthrown from power in a revolution that continues to have a destabilizing effect on the East African nation to this day.

It’s of some public interest that a more thorough explanation of Akubar Omar’s duties as an official serving under Siad Barre be provided, especially considering the former Barre official was granted refugee status in the United States sometime after Barre was overthrown in Somalia’s 1991 Civil War.

Omar has described her family as understanding that they were “no longer welcome” in the country as a result of the civil war, a development that may very well have come as a result of her grandfather’s work as a nominally high-ranking government official under the Barre regime. Rep. Omar recounted an incident in which what seems to have been a family compound was placed under siege by rebels who vandalized the property in a 2016 profile with the Minneapolis City Pages.

Omar biographies also suggest that some of her aunts and uncles also worked as civil servants under Barre’s government.

An inquiry into Abukar Omar’s official duties as the Director of the National Marine Transport under Barre’s regime was sent to Omar’s press office, and the Congresswoman has yet to respond as of Wednesday night.

Ilhan Omar was also one of the few Democratic members of Congress to decline to formally vote to recognize the Armenian Genocide conducted by the Ottoman Empire after World War I, claiming the United States should be focusing on the legacy of slavery and persecution of Native Americans instead.

Certainly, one cannot be held to account for actions that their extended relatives engage in when they’re a child; but it’s quite rich that Omar has declined to account for her own grandfather’s seeming participation in a very real and historically documented “system of oppression” in any publicly known remarks on the family connection, while castigating American civilization for its supposed injustices.