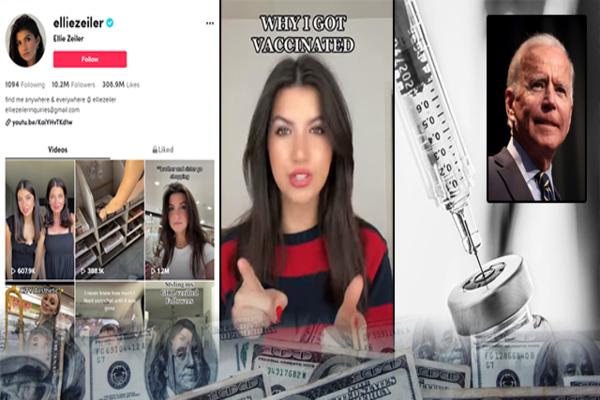 (IL) – “Influencers” on TikTok, Twitch, YouTube and Instagram are being paid $1,000 a month by state and local governments working together with the White House to shill Big Pharma’s experimental injections to their child audiences.

The potentially illegal government-funded propaganda program targeting children was detailed Sunday in a glowing article from the New York Times.

The White House has teamed up with TikTok stars, while some states are paying “local micro influencers” for pro-vaccine campaigns.

LOS ANGELES — Ellie Zeiler, 17, a TikTok creator with over 10 million followers, received an email in June from Village Marketing, an influencer marketing agency. It said it was reaching out on behalf of another party: the White House.

Would Ms. Zeiler, a high school senior who usually posts short fashion and lifestyle videos, be willing, the agency wondered, to participate in a White House-backed campaign encouraging her audience to get vaccinated against the coronavirus?

“There is a massive need to grow awareness within the 12-18 age range,” Village Marketing wrote to Ms. Zeiler’s business email. “We’re moving fast and have only a few available slots to fill, so please let us know ASAP.”

Ms. Zeiler quickly agreed, joining a broad, personality-driven campaign to confront an increasingly urgent challenge in the fight against the pandemic: vaccinating the youthful masses, who have the lowest inoculation rates of any eligible age group in the United States.

[…] To reach these young people, the White House has enlisted an eclectic army of more than 50 Twitch streamers, YouTubers, TikTokers and the 18-year-old pop star Olivia Rodrigo, all of them with enormous online audiences. State and local governments have begun similar campaigns, in some cases paying “local micro influencers” — those with 5,000 to 100,000 followers — up to $1,000 a month to promote Covid-19 vaccines to their fans.
The propaganda push was organized by the White House speaking together with “online creators” in “several off-the-record briefings over Zoom,” the Times reported.
Since then, the Biden administration has rolled out influencer discussions with Dr. Fauci and brought Ms. Rodrigo to the White House, where she urged people to “actually get to a vaccination site.”

[…] “I didn’t worry about the backlash,” said Christina Najjar, 30, a TikTok star known online as Tinx. “Helping spread the word about the importance of getting vaccinated was the right thing to do.”

Ms. Najjar said she was thrilled when the White House reached out to her through her manager in June. She soon posted a question-and-answer video about the vaccines with Dr. Anthony S. Fauci, director of the National Institute of Allergy and Infectious Diseases, on Instagram.

Note, Zeiler did not disclose in either of these videos that she’s making these videos as part of a White House propaganda campaign.

It’s pretty funny how she says the whole appeal to being vaxxed is that you don’t have to wear a mask as mask mandates even for the vaccinated (who are spreading covid at least as much as if not more so than the unvaccinated) are now returning all over the country.
In February, Colorado awarded a contract worth up to $16.4 million to the Denver-based Idea Marketing, which includes a program to pay creators in the state $400 to $1,000 a month to promote the vaccines.

Jessica Bralish, the communications director at Colorado’s public health department, said influencers were being paid because “all too often, diverse communities are asked to reach out to their communities for free. And to be equitable, we know we must compensate people for their work.”

As part of the effort, influencers have showed off where on their arms they were injected, using emojis and selfies to punctuate the achievement. “I joined the Pfizer club,” Ashley Cummins, a fashion and style influencer in Boulder, Colo., recently announced in a smiling selfie while holding her vaccine card. She added a mask emoji and an applause emoji.

“Woohoo! This is so exciting!” one fan commented.

Posts by creators in the campaign carry a disclosure that reads “paid partnership with Colorado Dept. of Public Health and Environment.”

Patricia Lepiani, president of Idea Marketing, said local micro influencers are in demand because they can seem more authentic than national social media stars. “Vaccination campaigns will only be effective if you know your community,” she said.

[…] Other places, including New Jersey, Oklahoma City County and Guilford County, N.C., as well as cities like San Jose, Calif., have worked with the digital marketing agency XOMAD, which identifies local influencers who can help broadcast public health information about the vaccines.

Governments’ interest in the campaigns has spiked sharply in the past week, said Rob Perry, chief executive of XOMAD, as concerns have grown about the spread of the Delta variant of the virus. He added that “when large numbers of influencers post in the same time period, vaccination rates go up.”

For Ms. Zeiler, the TikTok star, things moved quickly after she signed on to the White House-backed vaccination campaign. In June, she held an online conversation with Dr. Fauci, using the time to squash the false rumor that vaccines cause infertility. It was a conspiracy theory that she had heard from friends and that she had seen videos of on her TikTok “For You” page.

Ms. Zeiler has since used her footage with Dr. Fauci for other platforms, including Instagram, and created original content for YouTube promoting the vaccines. In one 47-second video, she spoke directly into the camera, ticking through the reasons she had gotten vaccinated and why others should too. “Reason one,” she declared, was “you can go wherever you want.”

Ms. Zeiler said in an interview that her work was not done. “I know I won’t stop until all my followers are safe and vaccinated,” she said.