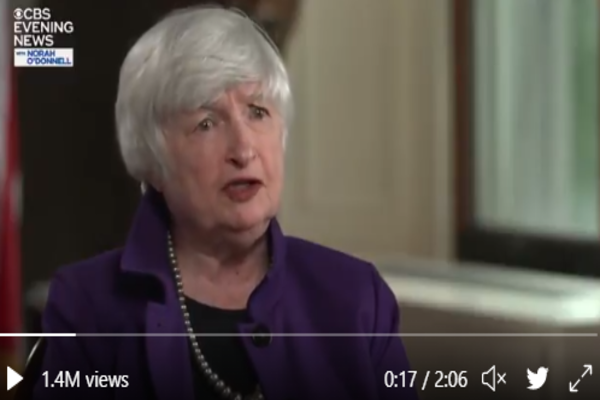 (breitbart) – Treasury Secretary Janet Yellen said on Tuesday’s broadcast of “CBS Evening News” that the proposed $600 IRS reporting requirement for banks is “absolutely not” a way for the government to spy on Americans.

Anchor Norah O’Donnell asked, “You want banks to report transactions of 600 dollars or more? That is what the IRS wants. Does this mean that the government is trying to peek into our pocketbooks? If you want to look at $600 transactions?”

Yellen replied, “Absolutely not. I think this proposal has been seriously mischaracterized. The proposal involves no reporting of individual transactions of any individual. The big picture is, look, we have a tax gap that over the next decade is estimated at $7 trillion. Namely, a shortfall in the amount the IRS is collecting due to a failure of individuals to report the income that they have earned.”

O’Donnell said, “But that is among billionaires, is that among people who are transfers 600 dollars?”

Yellen said, “No, it tends to be among high-income individuals whose income is opaque, and the IRS doesn’t receive information about it. If you earn a paycheck, you get a W-2 the IRS knows about it. High-income individuals with opaque sources of income that are not reported to the IRS, there is a lot of tax fraud and cheating that is going on. All that is involved in this proposal is a few arrogate numbers about bank accounts, the amount that was received in the course of a year, the amount that went out in the course of a year.”