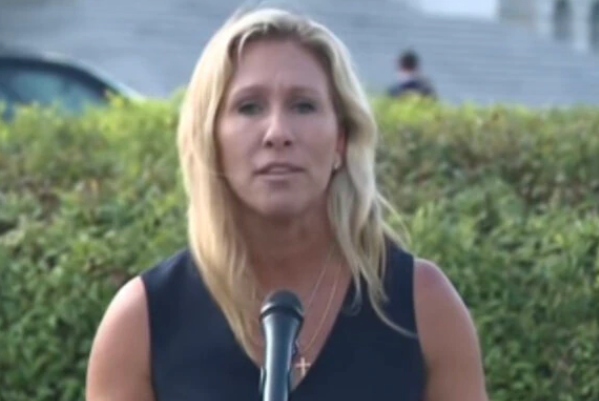 (bigleaguepolitics) – On June 17, 2021, Marjorie Taylor Greene introduced the Brian A. Terry Memorial Eliminate the ATF Act, a bill that would abolish the Bureau of Alcohol, Tobacco and Firearms (ATF).

She introduced the hill in order to protect lawful gun owners from a “tyrannical, power hungry group of bureaucrats.”

According to a report by Jenni Fink at Newsweek, the bill would abolish the ATF and scrap regulations and guidance issued after August 2020.

Greene’s bill was introduced during a time when controversial ATF nominee David Chipman was put forward by the Biden administration to head the agency. Chipman’s involvement during the Waco Massacre and his fervent advocacy for civilian disarmament triggered a number of alarm bells for Second Amendment lovers.

The legislation in question would abolish the ATF six months following the enactment of this bill. Additionally, it would compel the president to notify every employee in writing of the agency’s abolition date.

Additionally, Greene’s bill would establish an auction for the ammunition and firearms that the ATF seized. The Georgia congresswoman’s reasoning behind the auction is to create a fund for the families of Border Patrol officers killed in the line of duty following December 1, 2009.

After the families who were affected by the death of a loved one in the Border Patrol received grants of up to $150,000 per family, the funds left over would go to states who implement firearm safety programs.

“I’m introducing legislation to Eliminate the ATF to protect ALL gun owners across this country from a tyrannical, power hungry group of bureaucrats whose goal is to destroy our Second Amendment rights,” Greene informed Newsweek.

Greene also took the time to criticize Chapman while making her announcement of her plan to abolish the ATF. She declared that Chipman’s nomination is a “clear indication” that the “ATF’s war on gun owners is about to crank up.”

While the passage of Greene’s bill is unlikely due to the partisan composition of Congress, it’s very much a conversation starter. It’s also a strong indicator of the times we live in which people have lost all forms of trust in institutions and are beginning to stock up on firearms related goods such as surplus ammo and other items to defend themselves and their loved ones.

Regardless of what one thinks about her, Greene provides a strong pro-Second Amendment that is desperately needed in Congress