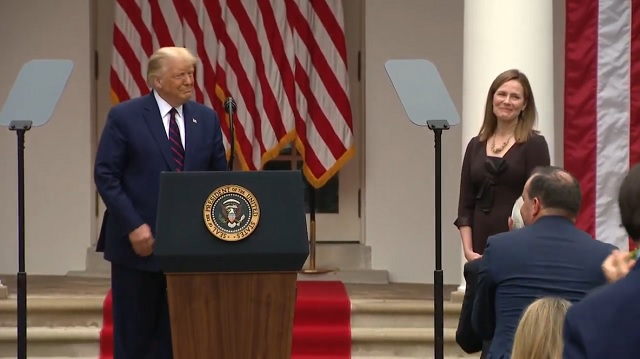 From LifeSite, “Trump nominates Catholic mom of 7 Judge Amy Coney Barrett to Supreme Court”:
President Donald Trump officially announced he intends to fill the open seat on the Supreme Court with pro-life Catholic Judge Amy Coney Barrett. If confirmed by the Senate, the 48-year-old will take the place of pro-abortion Justice Ruth Bader Ginsburg, who died on September 18.

In his speech in the White House Rose Garden, Trump confirmed what various media outlets, including The New York Times and The Hill, reported yesterday.

“I stand before you today to fulfill one of my highest and most important duties,” said Trump. “It is a very proud moment indeed.”

Trump called Barrett “one of our nation’s most brilliant and gifted legal minds.”

“She is a woman of unparalled achievement, towering intellect, sterling credentials,” and commitment to the Constitution, he said.

Barrett, a mother of seven children, including two who are adopted, will be the first pro-life woman on the Supreme Court. She will also be the only woman with children serving as a Supreme Court Justice.

Sonia Sotomayor, nominated by President Barack Obama, is divorced and never had any children, while Elena Kagan, also an Obama nominee, never married.

For many years, Barrett taught law at the University of Notre Dame. She became famous when California Senator Dianne Feinstein asked Barrett about her Catholic faith during her confirmation hearing for the U.S. Court of Appeals for the Seventh Circuit in 2017.

“When you read your speeches, the conclusion one draws is that the dogma lives loudly within you,” Feinstein had said. “And that’s of concern when you come to big issues that large numbers of people have fought for, for years, in this country.”

A former clerk for the late conservative stalwart Justice Antonin Scalia, Barrett is widely regarded as a pro-life originalist. She was a member of Notre Dame’s Faculty for Life group, signed a 2015 letter expressing “solidarity with our sisters in the developing world against what Pope Francis has described as ‘forms of ideological colonization which are out to destroy the family,’” and is reported to have signed another letter published by Becket Law criticizing the Obama administration’s contraception mandate.
Confirmation hearings are reportedly set to start on October 12th.