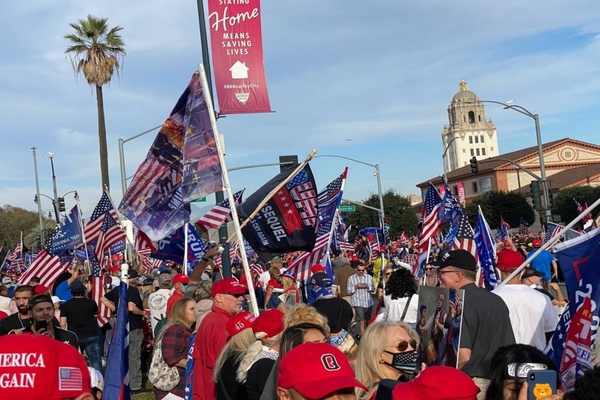 (breitbart) – Alex Bruesewitz, CEO of the Republican consulting firm X Strategies and target of the January 6th Committee, pled the Fifth when summoned to testify Tuesday — saying in remarks shared exclusively with Breitbart News that his “position has not changed” in refusing to cooperate with the “opposition research operation conducted by former ‘Republicans’ and the rabid left wing of the Democratic party.”

Bruesewitz made his statement out to the “American people” instead of directly to the committee — which ironically only allowed him to appear for his “closed-door” hearing over video conference. He told Breitbart News that after he and his attorney Joseph D. McBride, Esq. prepared to be with the committee for eight hours, he was only with them for 46 minutes.

In his prepared remarks, Bruesewitz explained that he rejected the original offer to voluntarily come in to speak with them “because the Committee is improperly constituted” and he has “no knowledge about the ‘attack’ on the Capitol.”

At the time of being asked to appear voluntarily, he also responded to them by explaining his position on Fox News’s Tucker Carlson Tonight and by releasing a statement, claiming they were targeting him in “retaliation” for raising money and speaking on behalf of candidates challenging various members on the committee.

He also told Breitbart News that following his appearance on TV and his statement, he received a subpoena demanding a closed-door testimony from the committee on February 17.

Bruesewitz acknowledged in his statement that he was subpoenaed because he “wasn’t interested in playing [the committee’s] game.” And while his position has not changed that the “committee is illegitimate and unconstitutional,” he decided to invoke his Fifth Amendment right after “a lot of prayer and advice from counsel.” He recognized in his remarks that the Fifth Amendment was “envisioned this exact type of situation — one in which the citizenry could protect themselves from an excess power grab or abuse by Congress in a Congressional hearing.”

But, while the establishment media and the members on the committee want to say he is hiding something, he declared that he is not.

“It’s been over 14 months since January 6th, 2021. This has been the largest manhunt in American history. I committed no crimes.”

Bruesewitz said that “there is no merit” for the committee to be looking into him, understanding that it is just the committee “playing the game of partisan, political lawfare.”

“I prefer to fight in the public square where the weight of the evidence and daylight exposes this Committee as what they are,” Bruesewitz wrote in his prepared remarks. They are “a constitutional farce concocted to settle political scores and scalp as many effective conservative voices as they can in advance of the midterms.”

“Unfortunately for them and for the messaging arm of the Democratic party, all of my actions on and leading up to and on January 6, 2021 were legal and constitutionally protected,” he added.