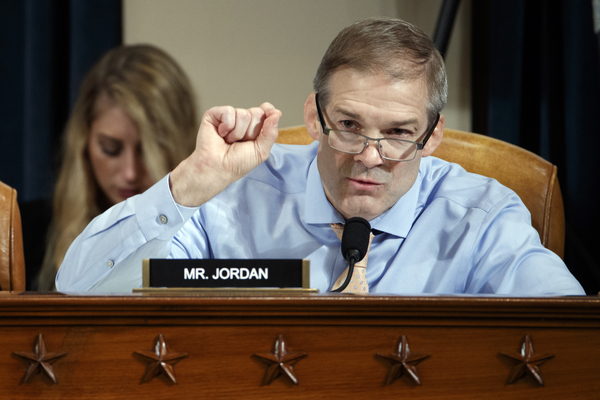 (breitbart) – Rep. Jim Jordan (R-OH) demanded on Thursday that the FBI submit to the House Judiciary Committee any records related to counterterrorism tools that the agency used against parents expressing outrage at school boards, Breitbart News has learned exclusively.

Jordan, who serves as ranking member on the Judiciary Committee, sent a letter to FBI Director Christopher Wray detailing the committee’s requests after Jordan published an email Tuesday from a whistleblower inside the FBI that revealed the agency’s counterterrorism and criminal divisions had created a “threat tag” for FBI officials to apply to investigations into threats made against school administrators.

“We are investigating the troubling attempts by the Department of Justice and the White House to use the heavy hand of federal law enforcement to target concerned parents at local school board meetings and chill their protected First Amendment activity,” the letter begins.

Read a copy of the letter below:

The Biden administration’s Justice and Education Departments have come under fire in recent weeks after Attorney General Merrick Garland released a memo on October 4 stating he was directing the FBI to engage in local education matters because of an alleged “disturbing spike in harassment, intimidation, and threats of violence against school administrators, board members, teachers, and staff who participate in the vital work of running our nation’s public schools.”

The letter suggested that such acts might warrant “domestic terrorism and hate crimes” classifications.

In response to a massive public outcry over the reference to domestic terrorism, the NSBA retracted its letter on October 22, apologizing for “some of the language” it had initially used and clarifying that the NSBA does value the “voices of parents.”

Garland, however, testified before both the Senate and House Judiciary Committees in late October and gave no indication that he intended to modify or retract his own message against parents when he was pressed by Republicans on the subject.

Garland, as Jordan noted on Tuesday in a public letter to the attorney general about the whistleblower document, testified that the FBI was “not using federal counterterrorism tools to target concerned parents.” Jordan called “into question the accuracy and completeness” of Garland’s testimony based on the whistleblower revelation and offered the attorney general an opportunity to amend his testimony:

In his letter to Wray, Jordan asserted that “the whistleblower disclosure only amplifies our need to investigate how the Biden Administration is using federal law enforcement resources, including counterterrorism tools, to target concerned parents at school board meetings.”

The Ohio Republican asked Wray for a record of the number of parents who have received a “threat tag,” which the whistleblower showed was labeled “EDUOFFICIALS.” He also asked for all documents and communications relating to the education tag and to any investigations of “school board threats sent or received by” the FBI’s counterterrorism assistant directors.

Jordan’s demands come as a follow-up to a request House Judiciary Committee Republicans made to Wray on November 3 for documents and communications relating to any activity the FBI had engaged in at the prompting of Garland’s October 4 memo.

The letter on Thursday revealed that Wray has not responded to the Judiciary Committee’s November 3 request, the deadline of which was November 17. Jordan reiterated that request and set a new deadline for the follow-up materials of December 2.