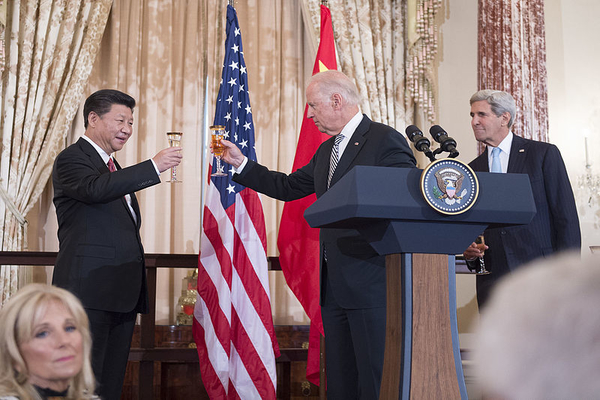 In an interview with the New York Times, Biden’s senior economic adviser, Ben Harris, says that as president, the former vice president will try out a new strategy embracing globalization.

A Biden administration is unlikely to continue to impose tariffs on friends and foes alike, deploying protectionist tools in a more strategic and disciplined way. [Emphasis added]

“Biden is not blindly pro-trade, but he doesn’t want to shrink from the world like President Trump has,” said Ben Harris, a senior economic adviser to Mr. Biden and his campaign. “What the vice president proposes is a new approach to globalization, one in which we don’t get behind every trade deal on the grounds that more trade is always better.” [Emphasis added]

In the United States Senate and as vice president, Biden has promoted globalization of the American economy for nearly 30 years. In the 1990s, Biden supported the North American Free Trade Agreement (NAFTA) and in 2000 and 2001, he supported normalizing U.S. trade relations with China and China’s entering the World Trade Organization (WTO).

Then, as vice president, Biden toured the country promoting the Trans-Pacific Partnership, which Trump threw out in his first week in office. TPP incentivized multinational corporations to offshore American industry and jobs.

“Fast-tracking TPP would make it easier for corporations to offshore U.S. jobs and push down our wages by forcing Americans to compete with workers in Vietnam who make less than 60 cents an hour and in Malaysia, where forced labor is widely used,” an analysis by Public Citizen noted.

“The TPP’s Investment Chapter provides special benefits to firms that offshore American jobs and eliminates many of the usual risks that make firms think twice about moving to low-wage countries, such as TPP member Vietnam,” the analysis found.

The policy would allow multinational corporations like Apple to escape the surtax by having contracted companies such as Foxconn, not affiliates, make their products overseas.

“The result would be that many U.S. manufacturers would avoid the tax by moving production to foreign contractors,” Carney notes.

President Trump, in contrast, has imposed tariffs on imports from China, Europe, Canada, and other foreign countries to bring manufacturing jobs back to the U.S. and protect American industries.

American manufacturing is vital to the U.S. economy, as every one manufacturing job supports an additional 7.4 American jobs in other industries.