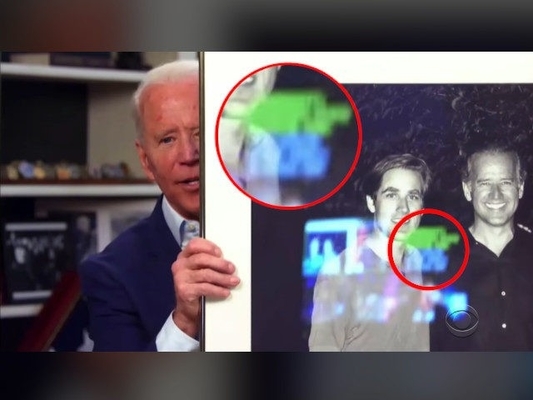 (breitbart) – Joe Biden appeared to accidentally reveal a screen with teleprompter text in front of him during an April television interview, a clip of which went viral Friday.

Biden appearing on CBS’s The Late Late Show months ago, held up a photo of himself posing with his two sons when they were in college, a picture which he said hangs in his bedroom:.

As he held up the framed picture, green text seemed to reflect off the glass and into his camera.

As the apparent text first appeared, the show quickly cut to a shot of host James Corden, then back to Biden holding up the photo.

Earlier this week, Biden press secretary TJ Ducklo would not answer one way or another whether Biden uses an aid to help him with answers during TV interviews.

“We are not going to eng— Bret, this is straight from the Trump campaign talking points,” Ducklo said during an appearance on Fox News.

He claimed such a question is “trying to distract the American people.”

Bret Baier asked for a yes-or-no response and Ducklo would not answer, and instead claimed such a notion was a distraction from Trump’s handling of the coronavirus.

Baier gave him another opportunity to answer.

“I’m not going to allow the Trump campaign to funnel their questions through Fox News and get me to respond to that,” Ducklo said.

In the first week of September, Biden sparked speculation about using a teleprompter during interviews by saying the words “topline message” while discussing the Trump administration’s Venezuela policy. Josh Holmes, former chief of staff to Sen. Mitch McConnell (R-KY), alleged Biden was “reading the header” aloud from a talking points memo.

The Biden campaign has not answered a request for comment at the time of this writing.