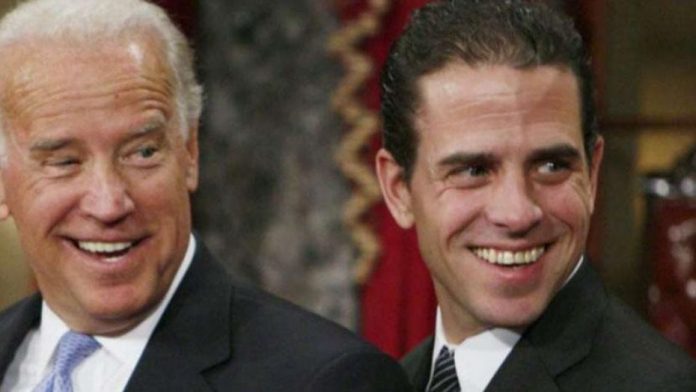 Hunter had a child with 28-year-old Lunden Roberts after meeting her at a DC strip joint where she worked as a stripper and she is demanding a hefty child support payment!

Ms. Roberts dragged Hunter Biden into a nasty court battle after he has ‘refused to pay child support for over a year’ and refused to pay her $11,000 legal bill.

Hunter Biden claimed in a sworn statement that he is in debt and unemployed and he is refusing to turn over the last 5 years of his financial records.

Lunden Roberts’ attorneys are asking that Hunter Biden be held in contempt of court for refusing to turn over his financial records related to Burisma and the Chinese private equity firm.

The Democrat Arkansas Gazette reported that Judge McSpadden recused at 10:20 AM without explanation.

McSpadden filed an order at 10:20 AM Tuesday saying he was recusing “pursuant to the Administrative Plan of the Sixteenth Judicial Circuit.” A hearing in the case was scheduled for Tuesday. Attorneys for Lunden Alexis Roberts had urged the judge to find Biden in contempt of court at that hearing for not providing financial information for the past five years. “One of the clearest indicators of a judge’s integrity is when he or she recuses from a case,” said Clinton Lancaster, one of Roberts’ attorneys. “It highlights the ethos and values that make the judiciary such a powerful, separate branch of government. Our client sincerely thanks Judge McSpadden for his time and attention to what has become a difficult and convoluted child support matter.”

The Daily Mail reported that a ‘defrauded investor’ Joel Caplan filed a motion in Independence County, in an effort to become a part of Lunden Roberts’ case.

Joel Caplan claims he was swindled in a scheme known as the ‘China Hustle’ and Hunter Biden’s bank records will show he was part of the scheme.

Caplan told Judge Don McSpadden to ‘follow the money’ and in a 30-page filing, lays out how he was allegedly swindled out of 10 years of his life savings in a ‘multi-billion dollar stock scheme known as the China Hustle.’ Caplan, who filed papers from Jerusalem, Israel, claims many Chinese nationals made fortunes from the ploy, which involved presenting fake company documents and claiming they were genuine investments when they were actual frauds. Then the Chinese Nationals went on to use the ill-gotten gains to influence politics and even ‘bribe’ individuals, such as Biden, Caplan claims. Caplan points to Donald Trump’s claim in October that Biden received a $1.5 billion payday from a China-based private equity fund. Biden has denied the claim, saying that he has not taken money from China. He said he bought into a Chinese investment fund after his father left office for $420,000. The $1.5 billion was the amount the fund aimed to raise in China for investments. Still, Caplan wants Biden’s bank records in an apparently far-fetched attempt to trace back the billions of dollars that went missing in China, in his bid for ‘justice’ and to possibly regain his lost savings.

Private investigator Dominic Casey also asked to be a part of the case and claimed he has obtained Biden’s bank account records, the Daily Mail reported.

The judge in Hunter Biden’s Arkansas paternity case has recused himself today, hours after an attempt to make the businessman’s Ukraine dealings the center of the case, according to court documents obtained by DailyMail.com. Judge Don McSpadden, of Independence County, didn’t give an explanation when he announced he was recusing himself at 10.20am. McSpadden’s recusal came two hours after ‘defrauded investor’ Joel Caplan, who wants to be made a party in the case, filed a witness statement from ex-Ukrainian prosecutor Viktor Shokin. Shokin claimed he was fired in 2016 because he was leading an investigation into Burisma and refused to shut it down, despite pressure from Hunter’s father, then-VP Joe Biden.