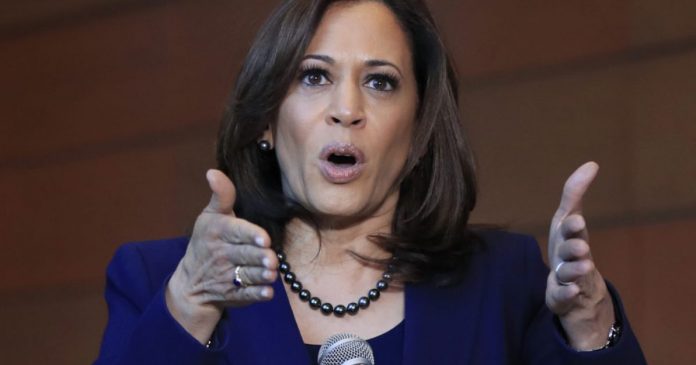 (bigleaguepolitics) – Earlier today, it was announced that Sen. Kamala Harris (D-CA) would be the running mate of former vice president Joe Biden.

Before Harris hitched her wagons to Biden, she said she believed the many women who came forward with allegations of sexual impropriety against the vegetative career politician.

Harris said in April 2019, when it looked like she might be a presidential front-runner and Biden was going to be her top competition, that she believed Biden’s accusers.

“I believe them and I respect them being able to tell their story and having the courage to do it,” Harris said during a presidential campaign event in Nevada.

Biden’s accusers include former Nevada state lawmaker Lucy Flores, Amy Lappos, Caitlyn Caruso and D. J. Hill. However, the most serious allegations against Biden come from a former staffer who worked under him at the U.S. Senate.

Big League Politics has reported about the allegations made by Tara Reade that Biden forcibly penetrated her with his fingers while she worked in his Senate office in 1993:

Tara Reade, a former staffer for Joe Biden while he was serving in the Senate, filed a criminal complaint in Washington D.C. against her former boss on Saturday alleging he sexually assaulted her in 1993.

Reade attests that Biden “assaulted her in a Senate corridor, shoving his hand under her skirt and penetrating her with his fingers.” Business Insider has reported that the “statute of limitations for the alleged assault has passed,” but this troublesome news is not expected to help Biden’s presidential chances.

Reade spoke her truth to writer Katie Halper when she appeared on her podcast last month. Reade claims that she has been trying to get justice for years but her story has mostly fallen on deaf ears due to Biden being protected.

“We were alone, and it was the strangest thing,” Reade said to Halper. “There was no, like, exchange really, he just had me up against the wall. His hands were on me and underneath my clothes. And then, he went, he went down my skirt and then up inside it, and he penetrated me with his fingers…and um…He was kissing me at the same time and he was saying something to me.”

“He got finished doing what he was doing and I, how I was pulled back and he said, ‘Come on man, I heard you liked me.’ And that phrase stayed with me because I kept thinking what I might have said,” she continued. “And I can’t remember exactly if he said ‘I thought’ or if ‘I heard.’ It’s like he implied that I had done this.”

Biden’s campaign is saying that all women should not be believed when they tell their sexual assault stories, a heresy to the far left in the age of #metoo. They are insinuating that Reade is a liar.

“Women have a right to tell their story, and reporters have an obligation to rigorously vet those claims. We encourage them to do so, because these accusations are false,” Biden’s deputy campaign manager Kate Bedingfield told Fox News in a statement.

Harris has shown that she has no scruples by accepting the vice presidential nomination from Biden, not that it should come as a surprise to anyone familiar with her real record.