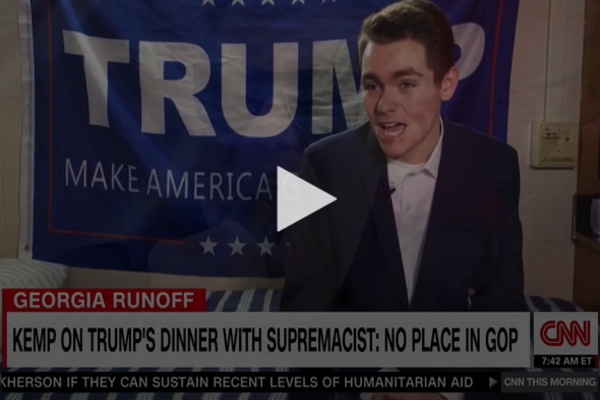 (breitbart) – Governor Brian Kemp (R-GA) said Tuesday on “CNN This Morning” that former President Donald Trump made a “bad decision” when he had dinner at his Mar-a-Lago home in Palm Beach, FL, with Kanye West and Nick Fuentes.

Co-host Kaitlan Collins said, “Let me get your reaction to something former President Trump has been under fire for, which is having dinner with Nick Fuentes, an outspoken white supremacist and antisemite?”

Kemp said, “I just put a statement out there. I’ll let that statement speak for itself. I mean, that was a bad decision. There’s no place for that in the Republican Party. And I know he’s got, you know, his answer to that question. I’ll let him speak to that, but my views on that are very clear.”

Collins said, “He has defended it, saying he was a guest of Kanye West, who was his guest, but he hasn’t criticized or denounced the statements we have seen, hateful language from Nick Fuentes.”

Kemp said, “Listen, I am not privy to who said what and all of that. I’ll just let my statement speak for itself. It’s very clear.”

Collins said, “But you did see the former president announce he will be running in 2024. Would you support him for that?”

Collins said, “Would you support him in that run?”

Kemp said, “I haven’t seen who else is going to run. So I’m going to keep focused on getting Herschel elected to the United States Senate. We do not need to get distracted from that.”