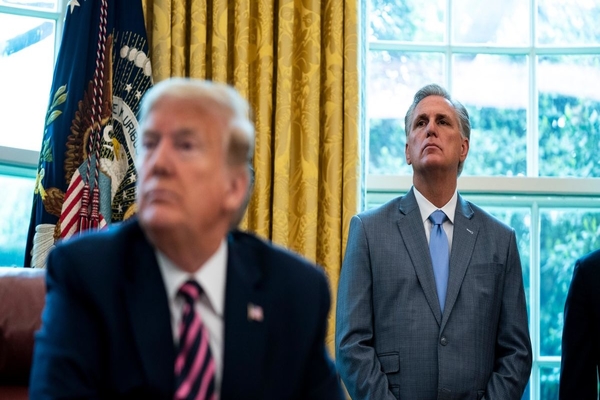 McCarthy single-handedly raked in a massive amount of campaign cash to take back the House from Speaker Nancy Pelosi’s (D-CA) socialist and partisan agenda.

McCarthy was able to raise $27.1 million in the first three months (January to March) of 2021 from 50,000 donors. It is the most money any Republican representative has ever raised in a quarter, according to the Wall Street Journal.

McCarthy was also able to raise this much money with only about $450 thousand coming from PAC money, which means less than about two percent came from corporate political action committees. This also shows that each donation averages less than $540.

To show some perspective on how much was raised this quarter, McCarthy raised about $100 million throughout the last two-year cycle. This is an average of $12.5 a quarter.

In the recent months after the January 6th riot at the Capitol, corporate PACs put a freeze on money going to Republicans. The amount of money raised by McCarthy without PAC money shows Republicans are not reliant on their donations anymore. This could lead to a new era of GOP fundraising.

While many of the American corporations have stayed clear of giving campaign dollars to Republicans, the very same corporations have played politics themselves. Corporations like Delta Airlines, Coca-Cola, and even Major League Baseball (MLB) have become involved in partisan politics.

After Georgia passed a voter integrity bill, Delta’s CEO gave a statement condemning the legislature to pass such a bill. Coca-Cola’s CEO did as well. MLB also used this opportunity to make a statement by moving their All-Star Game out of Atlanta, Georgia. Republicans have seized the moment to make an example out of these corporations and show Republicans are not beholden to corporate money.

McCarthy came close to flipping the House in 2020, having come within five seats of Pelosi’s majority. Going into the midterm elections, McCarthy will have to flip those seats while keeping the seats he already has.

Recently, McCarthy was in Iowa to rally support for Rep. Mariannette Miller-Meeks (R-IA) with a day full of public events, helping her save her seat from Pelosi. Pelosi tried “stealing” Miller-Meeks’ seat from a state-certified election in an attempt to add ranks to her slim majority.

The National Republican Congressional Committee (NRCC) also announced Thursday that it raked in a massive $33.7 million in the first three months of the year as they gear up to help McCarthy take back the majority in the House.

The NRCC has also started mounting an attack on vulnerable Democrat seats they are looking to flip. Recently, the campaign released attack ads on the vulnerable incumbents.