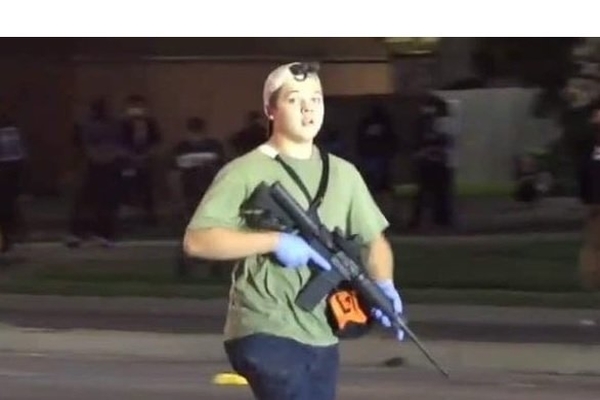 (thegatewaypundit) – Kyle Ritten house17-year-old Kyle Rittenhouse thanked everyone for their outpouring support on Tuesday while he was on the phone with his lawyer John Pierce.

“I just wanna thank every single one of you from the bottom of my heart for the underlining support,” Rittenhouse said on speaker phone. “I just want to thank all of you for the mail I’ve been receiving. It’s been really helpful.”

He continued, “I just want to let you all know that I’m going to be out of here soon…I hope to see you guys soon.”

Last week an Illinois judge postponed a decision on whether 17-year-old Kyle Rittenhouse should be returned to Wisconsin to face charges after he killed two men in self defense.

Rittenhouse was arrested last Wednesday and is currently being held at a Lake County juvenile center.

Completing this poll entitles you to The Gateway Pundit news updates free of charge. You may opt out at anytime. You also agree to our Privacy Policy and Terms of Use.
The teen was hit with 6 charges on Thursday:

According to the criminal complaint, the medical examiner found that Rosenbaum was shot in the groin, back and hand. He also suffered a superficial graze wound on his left thigh and a graze wound to the side of his head.

Rosenbaum was also a convicted sex offender involving a crime with a minor.

26-year-old Anthony Huber beat Kyle Rittenhouse with a skateboard before he was shot dead.

Rittenhouse was being chased by a BLM mob when he tripped and fell. At this point, Huber bashed him in the back of the head/neck with a skateboard. Rittenhouse defended himself and shot Huber in the chest. Huber immediately dropped and died.

Huber beats Rittenhouse with a skateboard

26-year-old Gaige Grosskreutz had his arm partially blown off after he aggressively rushed at 17-year-old Kyle Rittenhouse, who had just tripped and fallen while being chased by the BLM mob.

Grosskreutz had a gun in his hand when he ran up to Rittenhouse, so in self defense, the 17-year-old discharged his weapon, blew off part of Grosskreutz’s arm, saving his own life.

Rittenhouse was about to get a bullet to the head, but he acted quickly and shot Grosskreutz in self defense.

A friend of Gaige’s said that his only regret was not being able to kill 17-year-old Rittenhouse.

“So the kid shot gaige as he drew his weapon and gaige retreated with his gun in hand. I just talked to Gaige Grosskreutz too his only regret was not killing the kid and hesitating to pull the gun before emptying the entire mag into him. Coward,” a friend of Grosskreutz wrote in a chat.