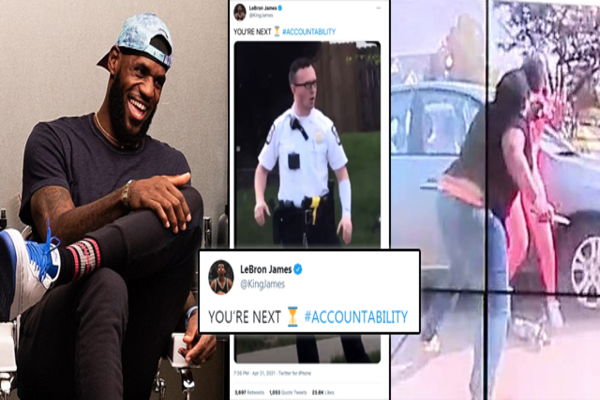 (informationliberation) – NBA player LeBron James on Wednesday evening threatened the cop filmed saving a black girl’s life by shooting armed 16-year-old Ma’Khia Bryant while she was in the middle of an attempted stabbing attack.

“YOU’RE NEXT,” LeBron tweeted ominously with an hourglass emoji to his 50 million followers. “#ACCOUNTABILITY.”

Bryant’s death went viral yesterday after it was falsely reported all over social media that she was shot while unarmed after calling police for help.

Police rushed bodycam footage out to placate the mob which showed she was shot by police during an attempted stabbing spree and the 911 tape revealed her housemates had called police on her for threatening them with a knife.

LeBron, whose career earnings are expected to surpass $1 billion this year, eventually deleted the threatening tweet after getting backlash and then made himself the victim.

“I’m so damn tired of seeing Black people killed by police,” James said. “I took the tweet down because its [sic] being used to create more hate -This isn’t about one officer. it’s [sic] about the entire system and they always use our words to create more racism. I am so desperate for more ACCOUNTABILITY.”

This comes one day after Officer Derek Chauvin was found guilty in the (fentanyl overdose) death of George Floyd to appease Black Lives Matter.

When are racial arsonists like LeBron James going to be held politically and legally accountable for their defamatory, inflammatory and threatening public statements?

The murder rate has skyrocketed in most major cities since the convicted terrorist behind the Black Lives Matter movement and her rich pals and useful idiots like LeBron got their way.

In just one year, the murder rate is up over 100% in Milwaukee, 78% in Minneapolis and 50% in Chicago according to preliminary findings from Jeff Asher.

As Steve Sailer has documented, the surge began during the Summer of Floyd.

Officer Nicholas Reardon, who shot Bryant to stop her knife rampage, should be getting praised for saving a girl’s life but instead, he’s likely had to go into hiding in fear for his life!