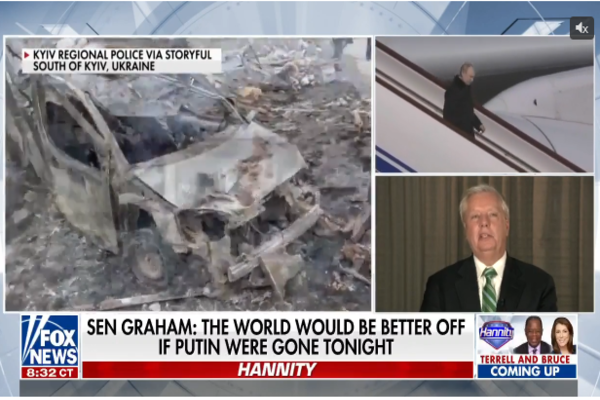 “I spoke to the Ukrainian ambassador earlier [Friday],” he said. “Your voice is breaking through. After I listen to your program every night, Putin needs a longer table. Here’s what I would say, I’ve been a military prosecutor, defense attorney, judge for 30-something years. I’m going to introduce a resolution next week — I’ll give it to you on your show — declaring that Putin is a war criminal. It’s clear to me the world would be better off if the Russian people took Putin out tonight. The war on Ukraine would end, and Russia would have freedom they don’t enjoy today. A steel curtain has descended upon the Russian people. What does that tell me? That Putin is afraid of his own people. Martial law has been virtually declared by Putin. I think the Russian people are not buying what Putin is selling when it comes to the Ukraine.”

“And if the Ukrainian people continue to fight as brave as they are, I think eventually, the dam will break in Russia,” Graham continued. “But I want to say this crystal clear — without apology, without equivocation — the world would be better off if Putin were gone tonight. And the best way to end this war is not American boots on the ground, but for the Russian people to rise up, reclaim the honor of their country and take this guy out, Putin, by any means necessary. And if you don’t understand that, you don’t understand this war, and you don’t understand the world in which we live.”