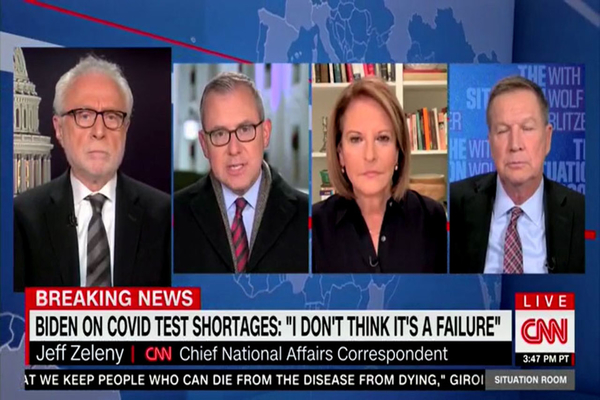 (foxnews) – CNN correspondent Jeff Zeleny knocked President Biden as “confused” about COVID-19 tests on Wednesday over his performance in an ABC interview that aired earlier in the evening.

In the interview with ABC’s David Muir, Biden repeatedly misspoke when referencing the 500 million at-home coronavirus tests ordered by the administration to distribute to the American people, referring to them as “pills” instead of “tests,” and avoided taking responsibility for his administration’s failure to have enough tests available for the expected winter surge of the virus.

“Repeatedly throughout this interview … President Biden seems confused and was confusing the half a billion tests that they’ve ordered with a half a billion pills. And, of course, pills were in the news today with the Pfizer approval of the anti-viral, so he corrected himself, but that was one thing that stuck out to me,” Zeleny said after host Wolf Blitzer played a clip of the interview.

“But then simply this administration, and the president leading the charge here, really not accepting any responsibility at all for this lack of testing,” Zeleny added. “We’ve seen these images across the country, long lines, just the inability to get tests. And yes, omicron came on very quickly here, but it has been almost a month since Thanksgiving where they knew this was coming.”

Zeleny noted Biden said he wished he had acted faster, but that, so far, there wasn’t any sense that the administration would be sending out the ordered tests in early January as the latter suggested in the interview.

Biden has faced criticism over the lack of testing, with some blasting him as being “behind the times,” considering the increasing rate at which the virus has spread in recent weeks.

Earlier this week Biden was pressed by reporters on the lack of availability of coronavirus tests, with some asking if it was a “failure” on the part of his administration to make sure there was enough available amid the high demand and the rise of the omicron variant.

Biden claimed that it wasn’t a failure and that no one anticipated the virus would be spreading this rapidly. However, on Wednesday, Centers for Disease Control and Prevention Director Rochelle Walensky contradicted him when she told Fox News’ Bret Baier that the rise in cases was “exactly what we anticipated.”