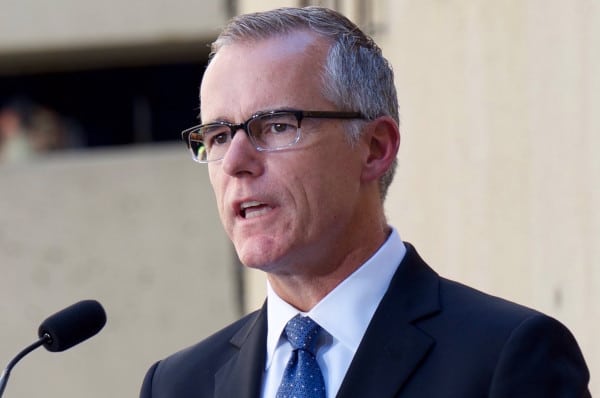 (Gateway Pundit) – The word on the street from some qualified sources is that former Deep State crooked cops are going to be arrested this week. And Lindsey Graham says “half of the Deep State” will be going to prison.

Half the people behind the Russia investigation are going to go to jail”.

Of course we’ve heard this before… Remember Huber? We’ve also heard Senator Graham say he was going to bring in a whole batch of villains before the Senate Judiciary Committee. Lindsey has been saying this since before he took chairmanship of the committee back in 2018. But so far Lindsey has failed to bring anyone before his committee, except for IG Horowitz, in over a year.

But another source, the same one who first outed Ciaramella as the whistleblower, Greg Rubini on Twitter, is saying Dirty cops Peter Strzok and Andrew McCabe (pictured above) will both be arrested this week, maybe even Monday or Tuesday.

We’ve been waiting forever and we won’t hold out breath, because this is long overdue.

We’ll keep praying for justice and we won’t stop praying, working and reporting until we see these criminals face justice.