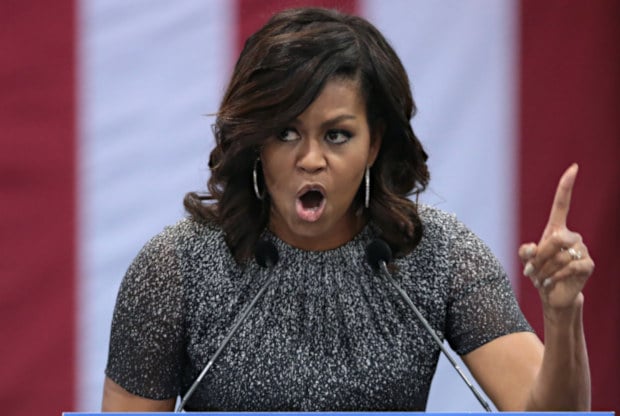 (Gateway Pundit) – Michelle Obama has never really liked America all that much.

“For the first time in my adult life, I am really proud of my country because it feels like hope is finally making a comeback,” she said back in 2008 before her husband was elected president.

The former first lady complained yet again on Thursday, this time while in Malaysia at the Obama Foundation’s leadership conference in Kuala Lumpur, saying America is “still not where we need to be” on race.

“We’re still not where we need to be in the United States of America when it comes to race. People thought electing Barack Obama would end racism. That’s 400 years of stuff that was going to be eliminated because of eight years of this kid from Hawaii? Are you kidding me?” she said.

She was joined by her husband, Barack, actress Julia Roberts, and former Miss Malaysia Deborah Henry to promote women’s education in Southeast Asia.

Obama complains about America a lot. She recently criticized America for what she said was a lack of compassion for migrants. “During her remarks at the annual Obama Foundation Summit, the former first lady singled out white families for moving out of her childhood neighborhood on the South Side of Chicago while black families moved in, likening her plight to today’s immigrants,” Breitbart News reported.

“As families like ours, upstanding families like ours who were doing everything we were supposed to do and better. As we moved in, white folks moved out because they were afraid of what our families represented,” Obama said in late October.

“There were no gang fights, there were no territorial battles. Yet one by one, they packed their bags and they ran from us. And they left communities in shambles,” the former first lady continued.

“I want to remind white folks that y’all were running from us,” she added. This family, with all the values that you read about, you were running from us. And you’re still running because we’re no different than the immigrant families that are moving in.”

WATCH: Michelle Obama speaks about racism at an Obama Foundation event in Kuala Lumpur, Malaysia: "We're still not where we need to be in the United States of America when it comes to race." pic.twitter.com/7Bj8dTfniv