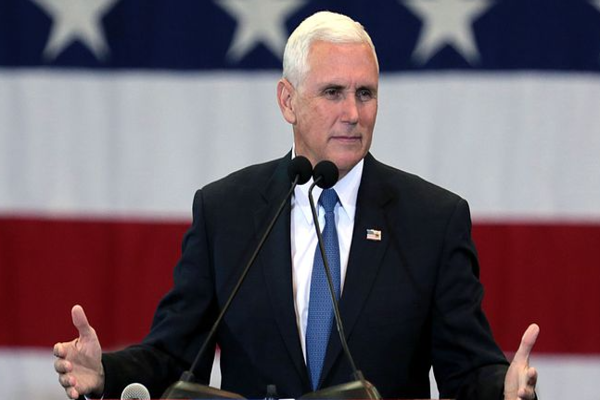 (breitbart) – Former Vice President Mike Pence during a speech Thursday in New Hampshire blasted the policies of President Joe Biden, observing the president had gone from campaigning “as a moderate” to becoming “the most liberal president since FDR.”

Pence delivered his remarks during the Hillsborough County GOP’s annual Lincoln Reagan Dinner, and as he railed against Biden and spoke optimistically about the Republican Party’s future, the former vice president only further added to speculation that he himself could be considering a run for president in 2024.

Although Pence did not give any indications of his plans during his comments, he conveyed a hopeful message to the GOP base about its prospects for upcoming elections. “I am here to say I believe we’re on the verge of another great Republican comeback, and it starts right here in the Live Free or Die state of New Hampshire,” Pence told the crowd as it erupted into cheers.

“We made history. We made a difference. We made America greater than ever before,” said Pence, who had been welcomed to the stage with a warm introduction by his friend New Hampshire Gov. Chris Sununu (R). “But how times have changed. You know the governor said he didn’t come here to bash the current administration. Well I did,” Pence said as he was met with more applause.

He continued, “So buckle up. I mean 134 days, and the Biden-Harris administration has launched an avalanche of big government liberal policies, the likes of which I’ve never even imagined I’d see in our lifetime, and all of it designed to derail the progress that we made over the last four years.”

Biden last week announced a $6 trillion annual budget proposal, which Pence referenced as an “explosion of runaway spending” before hammering the president specifically for his coronavirus relief package. Biden had called the package the American Rescue Plan Act, which he signed in March despite no House or Senate Republicans supporting it. The bill totaled $1.9 trillion and was packed with items unrelated to coronavirus.

“Our administration worked in the midst of the coronavirus pandemic in a bipartisan way. Every bill that passed through Congress passed on a bipartisan basis,” Pence said. “They forced through the Congress a COVID bill to fund massive expansion of the welfare state. They passed it on a partisan vote.” He lamented, “It’s amazing the difference of approach.”

The former vice president declared that “enough is enough” after “the Biden administration and Democrats in Washington have been pushing open borders, higher taxes, runaway spending, more government, defunding the police, abandoning the right to life, censoring free speech, [and] canceling our most cherished liberties.”

Pence juxtaposed those criticisms with achievements of his and former President Donald Trump’s tenure, including pre-coronavirus record low unemployment levels, tightened border security, the confirmation of close to 300 conservative judges to the federal court system, Operation Warp Speed, a pro-Israel peace plan, and more. Pence excoriated Biden for his changes or reversals to the Trump-Pence administration’s accomplishments.

“In 2020, you remember Joe Biden was campaigning as a moderate when he campaigned, but he’s literally governed as the most liberal president since FDR,” Pence declared.

He referred to remarks far-left “Squad” leader Rep. Alexandria Ocasio-Cortez (D-NY) made in honor of Biden’s first 100 days in office. “Even AOC said that President Biden had quote ‘exceeded progressives’ expectations,’ and that’s saying a lot,” he quipped. “But I don’t believe for one moment that that’s what the American people voted for in 2020.”