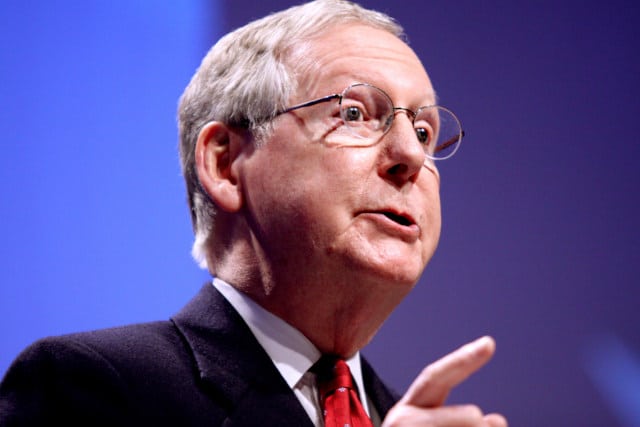 Pelosi is planning on ramming through an impeachment vote against President Trump by Christmas in the US House of Representatives. They have no crime defined but they are determined to find one in their secret meetings.

The US Senate would then take up the impeachment proceedings.

On Tuesday Mitch McConnell said he will sit down with Senator Schumer and have a conversation on how to handle the proceedings.

Mitch McConnell is against Trump and his voters.

McConnell on the President likening impeachment to a lynching: I would not compare this to a lynching. That was an unfortunate choice of words.

McConnell on if the Senate could quickly dismiss articles of impeachment in a Senate trial: It won’t be up to me..The Majority Leader does not really have ball control here..I don’t see anybody, myself or others, who could control this..I have no idea how long it will go on.

McConnell on how a Senate trial would work: There are all kinds of potentials..we’d have to come to grips with how we’d deal with this.

McConnell on how a Senate trial would work: If this were to come over from the House, Senator Schumer and I would sit down and have a conversation about it…The balls and strikes, if you will, are called by the Chief Justice.

Senate Minority Leader Chuck Schumer (D-NY) on the decision by the President to withdraw troops from northeast Syria: This is one of the worst decisions in decades..it puts Americans here in the homeland in danger..and we here in New York understand this better than anyone.