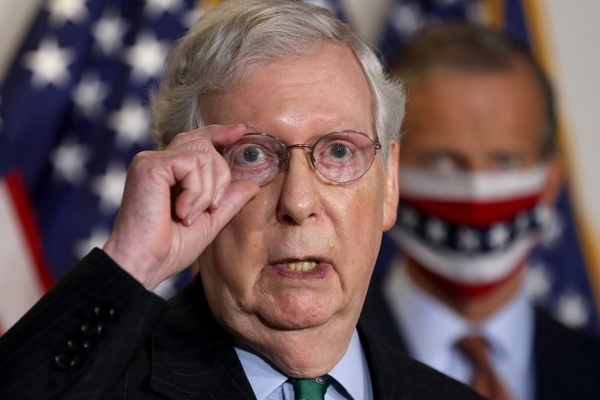 (dailyconservative) – Senate majority leader Mitch McConnell (R-KY) was the victim of vandalization as his family home in Kentucky was graffitied with angry messages. Clearly politically motivated, the vandals struck after McConnell stopped a bill that would have sent $2,000 checks to Americans.

McConnell’s Kentucky home was covered in messages like “where’s my money,” “Mitch kills poor,” and other far from friendly messages.

McConnell issued a statement on the attack saying, “I’ve spent my career fighting for the First Amendment and defending peaceful protest. I appreciate every Kentuckian who has engaged in the democratic process whether they agree with me or not. This is different. Vandalism and the politics of fear have no place in our society.”

The Kentucky Republican party also condemned the act saying, “Vandalism is reprehensible and there’s no place in our politics for acts like this. Kentuckians deserve better and the Democrats should join us in condemning this act of vandalism.”

Tensions are high even with the election over for the most part. Americans are far from satisfied with Congress’s performance in getting relief to Americans suffering from the coronavirus pandemic.

McConnell will need to ensure that the Republican party is doing everything it can to help Americans as millions have lost jobs and thousands have lost their businesses.