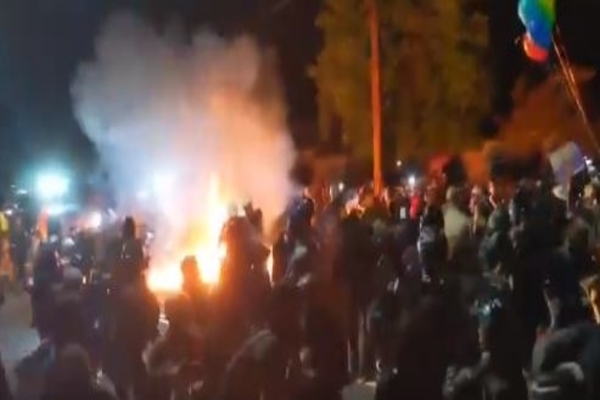 (breitbart) – A firebomb thrown by rioters at police in Portland, Oregon, on Saturday night set a “protester” on fire, according to the Portland Police Bureau.

Video taken at the scene and retweeted by the police showed fire erupting in the middle of a street, as a man caught in the flames attempted to run out of the way. He emerged with his legs ablaze, as rioters attempted to help him.

Reporter Andy Ngô of the Post Millenial tweeted that Antifa and Black Lives Matter staged the riot to mark more than 100 days of violent protest in Portland since the death of George Floyd in police custody in Minneapolis, Minnesota.

Earlier Saturday, the Oregonian remarked on the 100-day anniversary of violent demonstrations: “In Portland, the whitest major city in the U.S., demonstrations against systemic racism and police brutality have stretched for 100 straight days, sparking unprecedented cuts to the city police bureau, night after night of violence by law enforcement officers and protesters, presidential condemnation and national attention.”
Portland Mayor Ted Wheeler has refused support from President Donald Trump, blaming him for the violence.

Democrats, including presidential nominee Joe Biden, have referred to the rioters as “peaceful protesters,” blaming President Donald Trump for the violence, saying that the presence of federal law enforcement officials had been a provocation.

The violence has continued since federal officials withdrew several weeks ago.