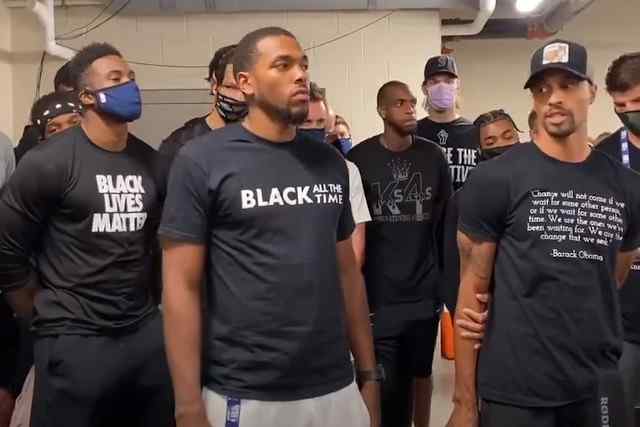 (breitbart) LAKE BUENA VISTA, Fla. — All three NBA playoff games scheduled for Wednesday have been postponed, with players around the league choosing to boycott in their strongest statement yet against racial injustice.

Called off: Games between Milwaukee and Orlando, Houston and Oklahoma City and the Los Angeles Lakers and Portland. The NBA said all three games would be rescheduled, yet did not say when.

The dramatic series of moves began when the Bucks — the NBA’s team from Wisconsin, a state rocked in recent days by the shooting by police officers of Jacob Blake, a Black man — didn’t take the floor for their playoff game against the Magic. The teams were set to begin Game 5 of their series shortly after 4 p.m., with the Bucks needing a win to advance to the second round.

Players had been discussing boycotting games in the bubble after the shooting of Blake by police in Kenosha, Wisconsin. More discussions were scheduled Wednesday, but even before that the Bucks apparently decided they would act.

“Some things are bigger than basketball,” Bucks senior vice president Alex Lasry tweeted. “The stand taken today by the players and (the organization) shows that we’re fed up. Enough is enough. Change needs to happen. I’m incredibly proud of our guys and we stand 100% behind our players ready to assist and bring about real change.”

There are three other playoff games scheduled Thursday. It was unclear if they would be affected. Several NBA players, including LeBron James, tweeted out messages demanding change and the Boston Celtics’ official Twitter account did the same.

Magic player and referees were on the basketball court for the game but Milwaukee never took the floor. Eventually everyone else left and the arena staff soon took the balls, towels and tags that go on player chairs back inside.

Demanding societal change and ending racial injustice has been a major part of the NBA’s restart at Walt Disney World. The phrase “Black Lives Matter” is painted on the arena courts, players are wearing messages urging change on their jerseys and coaches are donning pins demanding racial justice as well.

The Celtics and Toronto Raptors met Tuesday to discuss boycotting Game 1 of their Eastern Conference semifinal series, which had been scheduled for Thursday. Members of the National Basketball Players Association were also part of those meetings, and Miami forward Andre Iguodala — a union officer — said around 2:15 p.m. that he did not believe a boycott plan had been finalized.

Less than two hours later, the Bucks wouldn’t take the floor. And it all happened on the fourth anniversary of Colin Kaepernick’s very first protest of “The Star-Spangled Banner” before an NFL preseason game.