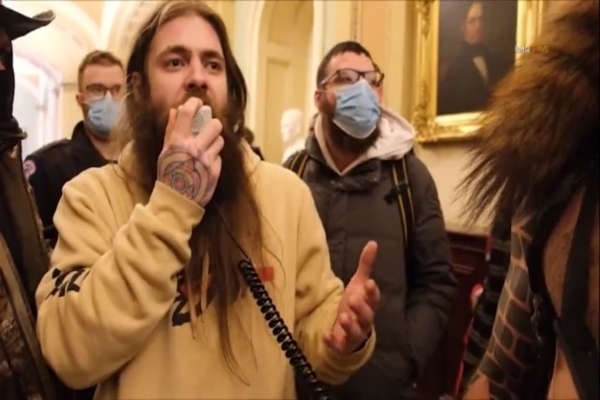 One officer, identified in the video and confirmed by charging documents as Officer Keith Robishaw, appears to tell Chansely’s group they won’t stop them from entering the building. “We’re not against . . . you need to show us . . . no attacking, no assault, remain calm,” Robishaw warns. Chansley and another protestor instruct the crowd to act peacefully. “This has to be peaceful,” Chansley yelled. “We have the right to peacefully assemble.”

The video directly contradicts what government prosecutors allege in a complaint filed January 8 against Chansley: “Robishaw and other officers calmed the protestors somewhat and directed them to leave the area from the same way they had entered. Chansley approached Officer Robishaw and screamed, among other things, that this was their house, and that they were there to take the Capitol, and to get Congressional leaders.”

Chansley later is seen entering the Senate chambers with a police officer behind him; he led several protesters in prayer and sat in Vice President Mike Pence’s chair. (The man in the yellow sweatshirt is William Watson, a drug dealer out on bond. He was arrested in January.)

Chansley is not charged with assaulting an officer; he faces several counts for trespassing and disorderly conduct. He has been incarcerated since January, denied bail awaiting trial. He has no criminal record.

Most of the Capitol protesters were let into “The People’s House” because cops recognized they had the right to peacefully assemble.

Other cops were also filmed telling protesters they “disagree” with their protest but “respect” their right to do so.

Democrats have “stormed” Capitol buildings in the past without any issue.

What was out of place was when a Capitol police officer chose to execute unarmed 14-year Air Force veteran Ashli Babbitt despite her posing no threat.

Babbitt’s killer was never charged nor even publicly identified.

The Biden regime is now hiding some 14,000 hours of footage in a bid to protect the fledgling “insurrection” narrative which Biden’s handlers are using as an excuse to take away all of our rights.