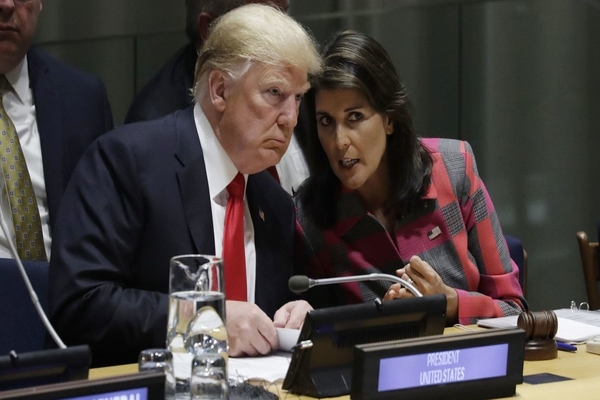 (foxnews) – Former South Carolina Gov. Nikki Haley said Monday that she would not run for the presidency in 2024 if former President Donald Trump mounts another campaign for the White House.

Haley served in the Trump administration as U.S. ambassador to the United Nations from 2017 to 2018. She is considered a potential contender for the GOP’s presidential nomination in 2024. When asked if she would support Trump if he runs again, Haley responded, “Yes.”

“I would not run if President Trump ran and I would talk to him about it,” Haley told the Associated Press. “That’s something that we will have a conversation about at some point, if that decision is something that has to be made. But yeah, I would, absolutely.”

Trump has yet to indicate whether he plans to run for president in 2024. During a speech at the Conservative Political Action Conference in February, Trump said he “may even decide to run again” and pledged to be active in the 2022 midterm races.

Haley said she last spoke to Trump “after the presidential election,” but before the Jan. 6 riot at the Capitol.

“I had a great working relationship with him, I appreciated the way he let me do my job,” Haley added. “I thought we did some fantastically great foreign policy things together. Look, I just want to keep building on what we accomplished and not watch it get torn down.”

Haley was a staunch advocate for the Trump administration’s policies in her role as U.S. ambassador to the UN. When the former governor resigned in 2018, Trump called her a “fantastic person” who did an “incredible job” in the post.

But Haley was one of several prominent Republicans who publicized criticized Trump following the Jan. 6 riot, when his supporters stormed the Capitol as lawmakers met to certify the Electoral College vote.

She told Politico that she believed Trump was “not going to run for federal office again.”