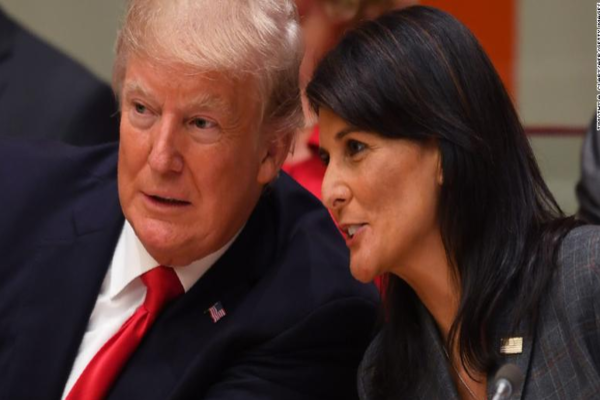 (breitbart) – “Enough is enough,” declared former U.N. Ambassador Nikki Haley, as she called to secure the border and warned that if all illegal immigrants were currently gathered into a new city, it would be the fourth largest in the country.

In a roughly one minute clip provided in advance to Breitbart News, Haley begins by quoting former U.S. President Ronald Reagan as saying, “A nation that cannot control its borders is not a nation.”

According to Haley, who served as President Donald Trump’s U.N. ambassador, with “just one look at Biden’s border crisis,” it is evident that “our border is overrun.”

Citing the growing numbers of illegal immigrants that have entered the country through the Biden administration’s open-border policies, she demonstrates just how high those numbers are.

“Since Joe Biden came into office, more than 2.5 million illegal immigrants have crossed our border; that’s enough people to fill up 36 football stadiums or enough people to outnumber the populations of 15 U.S. states,” she says.

“If all of the illegal immigrants were gathered to live in one new city, it would be the fourth largest city in America,” she adds.

Claiming there are “8,000 illegal immigrants crossing our border a day,” Haley notes “there is nothing controlled about that.”

However, she argues, there’s “still a way to fix this disaster,” though it would involve the president getting his “act together.”

Haley, who served as governor of South Carolina before heading to the U.N., then lists some of the moves President Biden could take:

She concludes by warning that the situation can no longer be tolerated.

Last month, Rep. Chip Roy (R-TX) warned the United States is under “invasion” at the southern border, as he called to reject funding a government that refuses to secure the border.

The country currently faces record-high levels of illegal immigration, with more than 209,000 migrants apprehended after crossing the border from Mexico into the U.S. in March, the highest number of migrant apprehensions for one month since March 2000 — the last year of the Clinton administration.

Last year, President Biden set new records for illegal immigration by enticing more than two million border crossers and illegal aliens to take the often deadly journey through Mexico to the nation’s southern border in the hopes of being released into the U.S.

Earlier this year, Department of Homeland Security Secretary Alejandro Mayorkas was reported to have admitted in private that illegal immigration in President Biden’s first year in office is “worse now than … ever” in American history.

In April, Sen. Marco Rubio (R-FL) warned the country was heading toward the “biggest migration crisis in U.S. history” as a result of Biden administration policies.

In March, Rep. Markwayne Mullin (R-OK) accused President Biden of significantly damaging national security by deliberately creating a border crisis to expand the Democrat voter bloc, as he called for an investigation into the president over his actions.