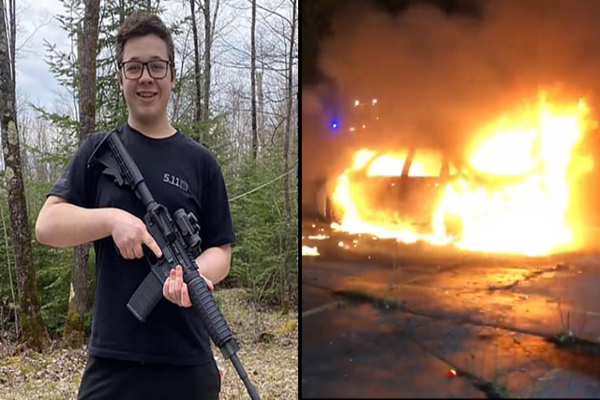 (breitbart) – Lawyers for Kyle Rittenhouse, the 17-year-old who allegedly shot three and killed two people during a riot in Kenosha, Wisconsin, this week, issued a lengthy statement Friday evening after delaying his extradition from Illinois to face trial for murder.

Rittenhouse was charged Thursday with six criminal counts — including two counts of first-degree murder. One of the two charges carries a potential sentence of life imprisonment.

However, the charging document indicated that in both encounters in which Rittenhouse allegedly fired his rifle, he had been attacked first.

In his statement, Pierce claimed that Rittenhouse had been asked by a local auto dealer to protect the premises from rioters. He suggested that before the shooting incident, Rittenhouse had provided first aid to protesters who had been injured.

Later, Pierce wrote, Rittenhouse was “accosted by multiple rioters who recognized that he had been attempting to protect a business the mob wanted to destroy.” That, he said, led to the violent confrontations that followed.

A 17-year old child should not have to take up arms in America to protect life and property. That is the job of state and local governments. However, those governments have failed, and law-abiding citizens have no choice but to protect their own communities as their forefathers did at Lexington and Concord in 1775. Kyle is not a racist or a white supremacist. He is a brave, patriotic, compassionate law-abiding American who loves his country and his community. He did nothing wrong. He defended himself, which is a fundamental right of all Americans given by God and protected by law. He is now in the crosshairs of institutional forces that are much more powerful than him. But he will stand up to them and fight not only for himself, but for all Americans and their beloved Constitution. We will never leave his side until he is victorious in that fight.

Pierce’s statement did not address the question of how Rittenhouse came into possession of his rifle, though Pierce indicated it had been obtained in Wisconsin and did not cross state lines. One of the six counts Rittenhouse faces is possession of a dangerous weapon by a person under 18.

Pierce indicated that the extradition hearing would be held September 25. Other lawyers on Rittenhouse’s team include L. Lin Wood, who represented Nicholas Sandmann, the Covington, Kentucky, high school student who sued the Washington Post and CNN after being smeared as a racist for wearing a MAGA hat during a confrontation initiated by left-wing activists after the March for Life in Washington, DC, in 2019.