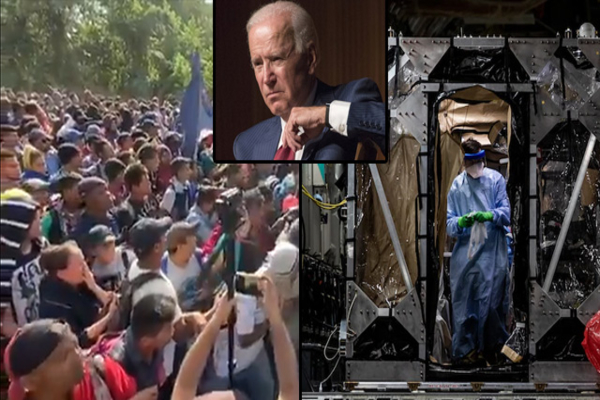 (informationliberation) – A prospective Joe Biden administration is reportedly planning to throw open America’s borders and reverse President Trump’s common-sense immigration policies while simultaneously throwing our country into a “strict” second lockdown in the name of stopping the coronavirus.

Biden COVID advisor Dr. Michael Osterholm told CNBC on Wednesday that a second lockdown could help control the virus and “revive” the economy.

“Shutting down businesses and paying people for lost wages for four to six weeks could help keep the coronavirus pandemic in check and get the economy on track until a vaccine is approved and distributed, said Dr. Michael Osterholm, a coronavirus advisor to President-elect Joe Biden,” CNBC reported.

Osterholm claimed that for the lockdown to be effective it “has to be as comprehensive and strict as possible.”

As a reminder, Zeke Emanuel — who has already been enlisted to join Biden’s prospective cabinet — suggested back in April that lockdowns will have to go on indefinitely and sand “we cannot return to normal until there is a vaccine.”

Osterholm also comically said the lockdown could help control the virus “like they did in New Zealand and Australia” — as though the United States has anything in common with those two island nations people can only get to by air or by sea!

The lockdowns in Australia and New Zealand have been Orwellian nightmares.

Meanwhile, while we’re being subject to Australian and New Zealand-style brutal lockdowns, Biden’s administration will be throwing open the borders to illegal immigrants and refugees!

The Remain-in-Mexico policy is the only thing keeping us from being flooded by gigantic migrant caravans from Central and South America.

The Trump administration has been paying Mexico’s government to stop these people at their border as America’s laws are so insane we were effectively blocked from stopping them at our own border.

Biden wants all of Trump’s common-sense border controls scrapped while claiming we need a second lockdown to stop corona!

We’re going to have open borders with the Third World while we’re told we may need to carry around digital passports and get experimental corona vaccines just to attend a concert!

These policies are so directly contradictory you have to wonder if it’s all just a scam to implement the World Economic Forum’s radical agenda dubbed “The Great Reset!”

Biden’s team has even copied the globalist “Build Back Better” slogan and just set up the website “BuildBackBetter.com!”