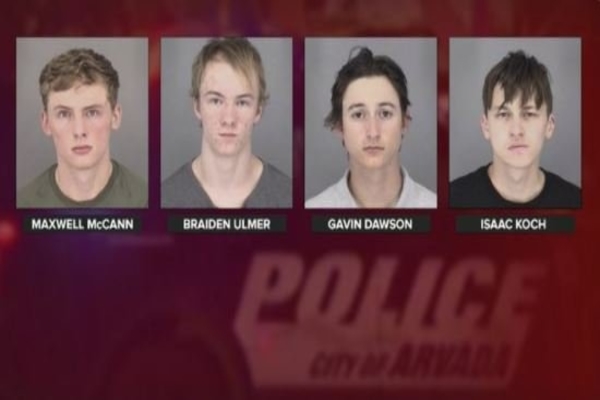 Four young violent leftists were sentenced last week on charges they created a road hazard as a stationary target. Then the young leftists hurled a chlorine bomb at the police officer when he stop to clear the road.

The young leftists were sentenced last week to 60 days in prison and probation for two years.

Sentencing was held on August 26, 2020 for three of four men convicted of throwing a chlorine bomb at an Arvada Police officer as he attempted to clear a road hazard. The hazard was built by the defendants to create a stationary target for their bombs.

On April 7, 2019 at 10:00 p.m., Arvada police received a call from a citizen regarding a road hazard at 72nd and Beech Street. The Officer arrived to find that street signs had been pulled out of ground and stacked in middle of the road, then plastic wrap had been strung across the road. The Officer and the citizen began to attempt to clear the road barricade when a plastic bottle was thrown and landed near the Officer. He overheard someone yell obscenities at him. When the bottle hit the ground it began releasing heavy chlorine gas. The Officer began coughing, became nauseous, lost consciousness, and fell to the ground. Other officers and paramedics arrived and the Officer was transported to the hospital.

They detonated at least seven additional incendiary devices in the area.

Arvada Police officers addressed the judge at the sentencing hearing, describing the impact this had on the officer, the entire department, and the community. During the immediate search for the offenders, a Code Red was issued for a one-mile radius in Arvada.

The officer suffered serious pulmonary damage and spent months going to medical appointments and missing work and continues to suffer the effects of the chlorine gas.

“These men set up an ambush for police. When the first Arvada officer arrived to clear away the road hazard, he was a fixed target for their toxic chemical bombs,” said DA Pete Weir, “These young men purchased the chemicals and plastic bottles at Walmart, mixed the bombs and then set up their targets for ambush. The impact on the law enforcement community has been enormous.”