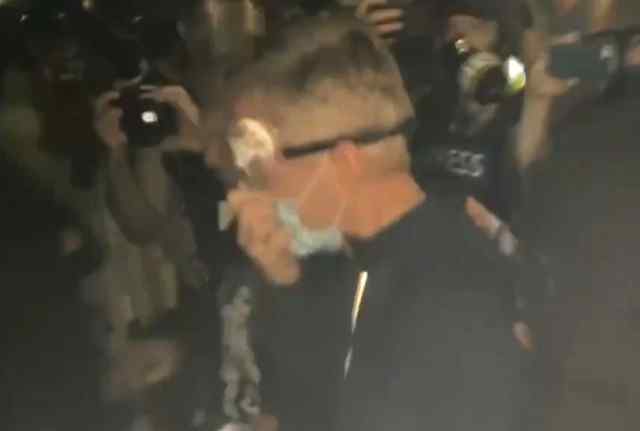 (Breitbart) – Portland Mayor Ted Wheeler joined a violent demonstration in his city Wednesday night at which “protesters” threw flaming bags of garbage at a federal courthouse — and where he was jeered by the crowd before being tear-gassed by federal officers.

The Oregonian reported that the mayor’s appearance on the 56th night of violent “protest” in downtown Portland “attracted attention and jeers from the crowd of more than 2,000 people” at the Mark O. Hatfield U.S. Courthouse.

USA Today reported: “The mayor was caught in a chaotic display of violence and mayhem that began around 11:15 p.m., after some protesters threw flaming bags of garbage over a fence protecting the local federal courthouse, prompting the federal officers to fire tear gas at the crowd.”

Video shot on the scene captured Wheeler at the fence around the courthouse, with flames burning in the background:

Nonetheless, the Oregonian noted, the mayor, who is also the local police commissioner, had been determined to stand in solidarity with the crowd against federal law enforcement. ““The reason I am here tonight is to stand with you,” he told the crowd, the paper reported. “If they’re launching the tear gas against you, they’re launching the tear gas against me.”

That solidarity did not win the hearts and minds of the crowd, apparently: “Protesters greeted Wheeler’s arrival at the start of the night by chanting his name preceded by an expletive. The crowd often shouted to drown out what he was saying.”

Wheeler attempted to acknowledge “systematic racism” and his own “privilege,” to no avail, as one video demonstrated:

Later, fireworks were fired at the courthouse before the federal law enforcement officers deployed tear gas to dispel the crowd.

Wheeler condemned what he called an “egregious overreaction” and blamed President Donald Trump for “urban warfare” before he was escorted to safety by his security team.

As he left, “protesters” jeered and attempted to attack him:

Earlier, USA Today noted, Wheeler had been accused of racism: “One white mother pointed out that Wheeler only showed up to the protests after other white mothers attending the demonstrations over the weekend were tear-gassed.”

The mayor has opposed the presence of federal officers to protect federal property that the city has failed to protect. A federal judge heard a state motion Wednesday to remove the feds; ironically, the judge works out of that same courthouse.

Wheeler has a long history of tolerating violent left-wing “protest” in the city. In 2018, he ordered police not to protect a besieged Immigration and Customs Enforcement (ICE) office in the city where “protesters” had trapped employees.