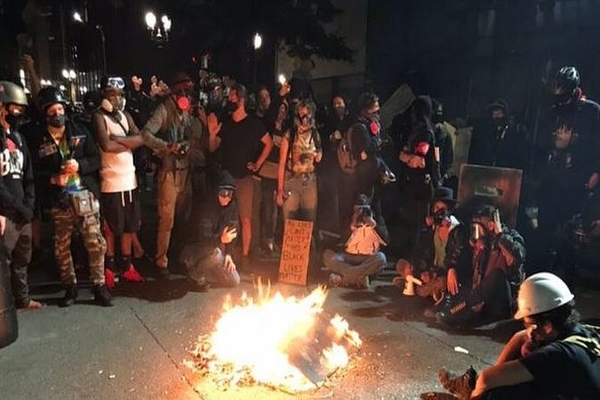 (breitbart) – In anticipation of a possible violent clash between right-wing protesters and Antifa on Sunday afternoon, Portland police officials announced they will not interfere or intervene.

“I understand the optics of that,” Chief Lovell stated. “But we have to make tactical decisions that put us in a place where we’re likely to be successful in making an arrest or taking someone into custody. To the extent that we can, we will make arrests whether it’s after something takes place or if it’s possible to make one at a different time, we’ll do that.”

Sunday’s protest is planned on the one-year anniversary of a violent clash between pro-Trump protesters and Antifa counterprotesters that left Aaron Danielson murdered. Danielson was shot in the chest after being “hunted down” by Antifa, Breitbart reported.

Police later identified the killer as Michael Forest Reinoehl. The shooter was later killed by police.

Police Chief Lovell’s comments about non-interference or intervention in the clashing protest come as the city’s Rapid Response Force resigned in June in protest over the lack of support for police by city officials, Breitbart reported.

The Portland Police Bureau tweeted that officials will “provide safety information and direction to participants and bystanders via loudspeaker.”

Independent Journalist Andy Ngo tweeted that Antifa is planning for violence against Sunday’s “patriotic-themed rally.” He added, “The antifa are openly discussing on Twitter the proper uniforms to wear to evade being identified.”