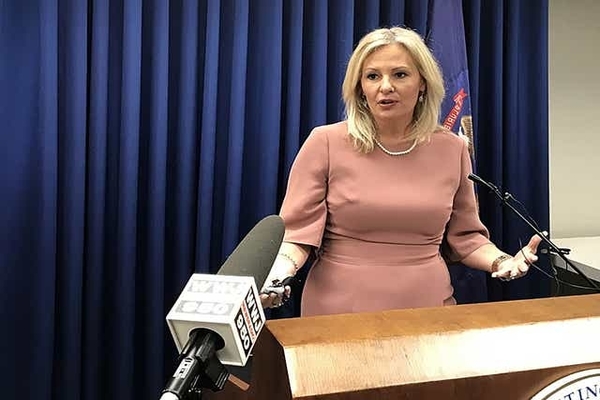 (breitbart) – Oakland County, Michigan Prosecutor Karen McDonald announced Friday that the parents of the Oxford High School shooter were being charged with involuntary manslaughter in the deaths of four students earlier this week.

McDonald, a Democrat, said that the parents were culpable because they ought to have known that their son was emotionally disturbed and ought to have prevented him from taking a handgun to school.

When their son was caught in school using his cell phone to search for information about ammunition, Mrs. Crumbley allegedly made light of the school’s concerns, telling her son that the lesson of the episode was that he should “learn not to get caught.”

The prosecutor then said that the day before the shooting, a teacher noticed that the shooter had created a drawing with a gun, bloody victims, and messages such as “the thoughts won’t stop, help me.”

The parents were summoned to meet with their son and the principal the next day. There, they were told they had to obtain counseling for their son within 48 hours. According to McDonald, they resisted the idea that their son should be pulled out of school immediately over the disturbing drawing.

McDonald partly based her case against the parents on the fact that during the meeting with the principal, on school premises, neither parent asked to search their son’s bag or asked him where the handgun was. She did not comment on the school’s failure to search the student’s bag, though it was on school premises (as was the gun).

The shooting took place later that same day. According to McDonald, Jennifer Crumbley texted her son, “Ethan, don’t do it,” after news of the shooting broke in the news.

OXFORD, MICHIGAN – DECEMBER 02: A flag flies at half mast in Centennial Park in honor of the students and staff killed and wounded in the November 30 shooting at Oxford High School on December 2, 2021 in Oxford, Michigan. Four students were killed and seven others injured when student Ethan Crumbley allegedly opened fire with a pistol in the school.

McDonald also said that the fact that James Crumbley rushed home to look for the gun after hearing news of the shooting at the school was evidence that the parents had reason to know beforehand that their son was likely to carry out a mass shooting. James Crumbley called 911 upon finding that the gun was missing, saying he believed his son could be the shooter.

The gun had been stored in the Crumbley’s bedroom in an unlocked drawer, according to McDonald.

McDonald, who said she was “angry” about the shooting, is a Democrat who was elected in 2020 with support from left-wing groups like the Color of Change PAC and the ACLU on a liberal agenda.

McDonald would not say precisely how much premeditation the shooter had before carrying out his act, nor could she say whether there was any other evidence that the parents knew their son had emotional problems or plans to attack the school.

She claimed that she was not trying to attack gun owners, but rather reinforcing the principle of responsible gun ownership. She would not confirm or deny, when asked, if a school resource officer had been present at the meeting with the principal.

She did say that the shooter should never have been allowed to go back to class after the meeting with the principal. When asked whether the father had executed an illegal “straw purchase” for the son, she replied that was a federal issue.