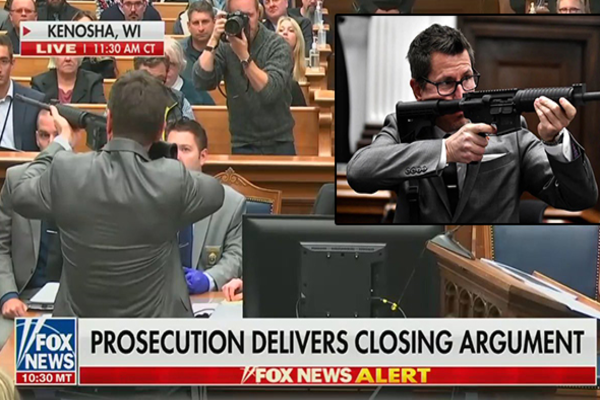 (IL) – Assistant District Attorney Thomas Binger boldly lied about the law during his closing argument and risked having an “Alec Baldwin” moment after pulling out Kyle Rittenhouse’s AR-15, putting his finger on the trigger and pointing it inside the courtroom.

Binger on Monday tried to claim Rittenhouse “provoked” the incident by having a gun and thereby forfeited the right to self-defense.

The judge dismissed a gun charge but allowed the prosecutor to argue Rittenhouse “provoked” the incident (which Binger went all in on).

Rittenhouse’s defense attorney Mark Richards said during his closing argument that Rittenhouse “has as much right to go there as anybody else in the city of Kenosha, and be unmolested by the likes of Joseph Rosenbaum” (who was a serial child sex offender).

Richards noted that this is “a political case” with the state looking for someone to blame for the riots.

“The District Attorney’s office is marching forward with this case because they need someone to be responsible, they need somebody to put– and say, we did it — he’s the person that brought terror to Kenosha! Kyle Rittenhouse is not that individual.”

You can watch Richards’ closing arguments in full below: